Written by Night For Vets on July 9, 2020. Posted in Gone But Not Forgotten 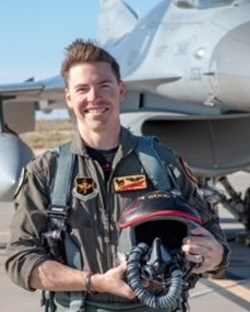 Lt. David John Schmitz, 32, was tragically killed June 30 in an F-16 training accident at Shaw Air Force Base, South Carolina. David strived to be the best in everything he did and always brought others along with him without any desire for praise. If you knew David, you knew his infectious laugh, quick smile and perpetually positive attitude, as well as his drive, persistence and determination. David was born February 17, 1988, in Santa Barbara, California. He had an early love for flying and earned his private pilot’s license at 17. He enrolled in Air Force ROTC at San Diego State University with the hope of obtaining an Air Force pilot slot. He was one of the top cadets in his class. Prior to completing his degree at SDSU, David made the decision to enlist in the United States Air Force, where he became a loadmaster and instructor on the C-17 cargo plane. He was trusted with our nation’s most sensitive missions, such as delivering critical supplies to ground troops in Afghanistan and Iraq. During his time as a loadmaster, he met his future wife, Valerie Rudolph, at Olive Garden in Las Cruces, New Mexico. They had an immediate connection and although David was stationed at McChord AFB in Tacoma, Washington, they began their love story over long-distance, which included two overseas deployments. They were married in 2013 in Valerie’s home state of New Mexico. David never gave up on his lifelong dream of becoming a fighter pilot and completed his undergraduate degree in aeronautics through Embry-Riddle Aeronautical University, studying even while deployed. This enabled David to apply for and earn a pilot’s slot and commission through Officer Training School. He later completed undergraduate pilot training with high honors, earning the Academic Training Award, Flying Training Award, Distinguished Graduate Award, and the Outstanding Lt. Peer Recognition Award at Laughlin Air Force Base in Del Rio, Texas. He was also awarded Top Gun in air-to-air combat in his Introduction to Fighter Fundamentals course. David was selected to fly the F-16 fighter jet and was assigned to Shaw AFB, where he was a respected and loved member of the 77th Fighter Squadron. David’s life has been marked by humble leadership, overcoming obstacles, and never giving up on his lifelong dream of flying. David is survived by his loving wife, Valerie Schmitz and their dog Toby; his parents, Brian and Sherrie Schmitz; his sister, Laura Schmitz (Isaac Stewart); his grandmother, Louise Schmitz; and numerous aunts, uncles, cousins, and lifelong friends. David will be remembered, loved, and greatly missed by all.