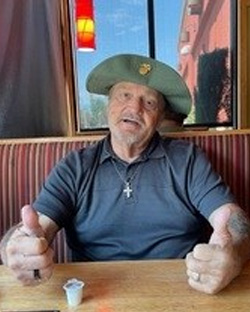 June 17,1950 – October 23, 2021 David was born on June 17, 1950 to Eugene and Lucille Turner in Warroad, Minnesota. He enlisted in the Marine Corps in 1968. Served in Vietnam and was discharged in 1976. He married his wife Gayle on December 8, 1968. Together they raised their sons, Christopher, Ronald, David and Terrance and their daughter Robyn. He was a beloved grandfather to Jessica, Melissa, Christopher, Adam and Madalyn Walker, Ronni Jo Walker, Christina Duro, Ariana, Macey and Andrew Necochea, Christian, Dillon, Cameron, and Serena Turner, and Sarita Garcia. He was a shining light for his great grandchildren, Kaytely Norvell, Emiley Walker, Christopher and Kylie Walker, Robert Madril, Kalimae and Kaeden Necochea, Leilah, Serenity, and Avahya Duro, Hazel Necochea, Silas Turner and Rhia Pia. He is survived by his wife Gayle, his children Christopher, Ronald, Robyn, David and Terrance, his 14 grandchildren and 13 great grandchildren, his brother Hal and sister Faye. He was preceded in death by his parents Eugene and Lucille, his brother Jimmy, his sister Karen and baby daughter Stephanie whom he joins in heaven.