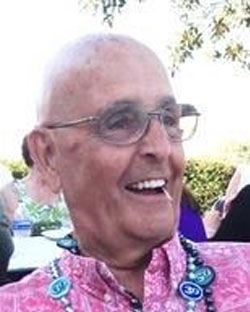 March 29, 1933 – March 28, 2022 Dean Alexander was born March 29, 1933 in Riverside, CA and passed away peacefully surrounded by his wife and children the day before his 89th birthday. Dean was born prematurely and was very proud of the fact that he was one of the first infants to use an incubator at Riverside Community Hospital. His twin, Darrell passed away shortly after birth. He graduated from Riverside Poly High School in 1951, attended the University of Redlands and taught real estate economics and finance at Riverside City College for many years. He married Marlene Alexander, his high school sweetheart; they were married for 48 years before she passed away from breast cancer 20 years ago. He served in the U.S. Navy during the Korean War and took an early retirement in 1986 from his position as Vice President of Security Pacific National Bank to work as a private financial consultant. He was actively involved in the Jaycees and the BIA (Building Industry Association) and served in various leadership positions in both organizations including President. He loved spending time with his family and enjoyed being the patriarch of the extensive Alexander clan. Dean was widely known for his sarcastic wit and he would be the first to tell you that he is perfect. He lived many years in Big Bear and was happiest on the lake with a fishing pole in his hand. Dean married Dare Beld on May 28, 2005 and they spent many enjoyable hours and miles traveling the country in their motorhome. Dean will be tremendously missed by his family. He is survived by his wife Dare, his kids and in-laws, Cyndi (Glenn) Rowden, Steve Alexander, David (Heidi) Alexander, Sandi (Steve) Ah Sue-Corry, Tami (Brent) Fast, fourteen grandchildren and nine great-grandchildren with two more on the way. He was preceded in death by his first wife Marlene Alexander and his son-in-law Herman Ah Sue. He is also survived by 7 bonus children (and their spouses), 23 bonus grandchildren, and 13 bonus great-grandchildren who all loved and adored him as well. The family would like to thank Megan, Tif, Susie (Java), Patty, Gina, Ruby, Yesi, Maria, Paloma, Encelia, and Deisy from Sunrise at Canyon Crest for the care and love they have provided Dean for the past 18 months. He appreciated each and every one of you.