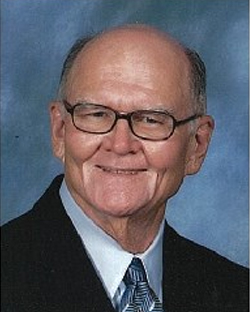 Dean Gahre, born February 1930 – Died March 2020. He was part of The Silent Generation… He was born in Upland, Ca to Mike & Tena Gahre. The family then welcomed sister Ardell. Dean grew up in the Ontario, CA area, attended Chaffey High school and Chaffey College. He played football at both levels. While attending Chaffey College he was honored to play in the Jr Rose Bowl. Upon graduation from Chaffey College, he attended Wartburg College in Waverly, Iowa. There he studied religion, played football, met Wera and earned the nickname “Boomer”. He was drafted into the U.S. Army while attending Wartburg College. He was allowed to finish his courses and graduated from Wartburg. Then he was off to be part of the Korean War. Upon completion of his tour he went back to Iowa and married Wera. Then they moved to California. Dean became a lifelong educator. His career began as a teacher for Fontana at West Randall Elementary, Live Oak Elementary, then became a principal at Jurupa Hills Elementary. He earned his masters at CSLA & continued taking courses toward his doctorate through USC. He was a part of the Fontana Unified School District administration. His favorite part of being an educator was working with kids. He returned to the classroom at North Tamarind Elementary and continued there until retiring. After which he continued on a regular basis to volunteer in various classrooms at North Tamarind until early 2020. At North Tamarind he was honored with a garden in his name- twice & received the Fontana Mayor award for his volunteering. He is survived by his loving family his wife Wera, sister Ardell, daughter Teri, son Scott (Annette), daughter Jodi. Grandchildren Kylie and Connor. He was preceded in death by his parents Mike & Tena. Dean was a big man with a big heart, he enjoyed sharing, encouraging others, talking to people and was also very witty. He was an avid reader- reading between 2-4 books at a time. He had a passion for fashion as was reflected in photos, his love of a double knit suit in his early days, to his rainbow bright patterned dashiki, made by Teri. Dean was also fiercely competitive and loved a good game of pinochle-as well as, ping pong. He was active in the community as part of the Fontana Lions Club holding various officer positions. He was a member of the Elks Lodge. Was part of the YMCA as an officer.