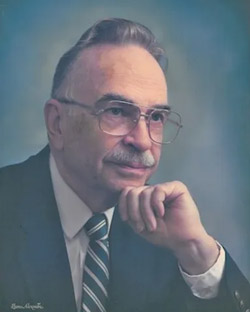 Born to loving and devoted parents Lee Roy Van Voorhis, a plumber, and Alfreda Peterson Van Voorhis at their Colton home on February 4, 1922. In 1937, at age 15, Van became Colton’s youngest ambulance driver. All hours of the night, he would respond to emergency calls in a supercharged Cadillac LaSalle owned by a city mortuary.

Van attended the University of Redlands and USC, where he earned a doctoral degree in dental surgery, and the honorific of Best Dressed Man on Campus. It was during this time that dapper Van met his future wife, a dark-haired model named Margaret Jean Paver, while passing on a stairway at a Los Angeles hotel. The two married soon after and settled in Colton with Margaret’s young son, Ted.

In 1950, the couple was raising a growing family and Van was embarking on a new dental practice when the U.S. entered the Korean War. The Department of Defense ordered Van to report for duty at Norton Air Force Base. He served as an Air Force captain at the base, where he established dental offices and trained dentists in the latest techniques and modern materials for dentures.

After military service, Dr. Van Voorhis established his Colton dental practice. He offered dental services free of charge to religious clergy and graciously accepted eggs and farm produce from community members who could not afford essential care. In 1959, Doc used a new life-saving technique called cardiopulmonary resuscitation on an electrocution victim and saved his life. Days later, the fire department asked him to train responders in CPR.

In addition to a loving and supportive family, Doc was blessed with good health and boundless energy. He had a strong entrepreneurial spirit and a sense of duty to the community. He was grateful for God’s gifts and sought ways to give back.

Doc volunteered his time toward Colton’s development by serving as president of the Colton Chamber of Commerce and chairman of Colton Finance Committee, Citizens for Freeways and Highways, and the Industrial Development Committee. He was the chairman of and an ardent fundraiser for the Arrowhead United Fund, United Way of Colton, and United Way of San Bernardino.

He served on Colton School Board for 10 years. Both he and Margaret were actively involved in Santa Clause Incorporated, a non-profit organization that collects and distributes Christmas gifts to disadvantaged children.

The Republican Party asked Doc and Margaret to entertain Gov. Goodwin Knight at their home in the late 1950s. They also hosted the annual Welcome Gathering for new administrators and professors of CSU San Bernardino.

In 1962, the couple and their five children moved from their home in Colton to a more spacious house in the hills of San Bernardino, where Doc continued his community service and expanded his volunteer work with San Bernardino Board of Trade. He established Secure Savings & Loan in San Bernardino, for which he served as director until its sale in 1988.

Doc’s interests also expanded to Orange County’s coast. In the early ’60s, he purchased La Playa Motel in Laguna Beach and traded it shortly thereafter for two homes on Balboa Island and an apartment building on Newport Peninsula.

He ventured into the radio business in the 1980s, purchasing a station in Barstow, and then establishing two new stations, KHPY and KIOT-AM 1530 in Redlands. Over the decade that followed, Doc retired from his dental practice in Colton and eventually sold his radio stations.

In retirement, Doc split his time between his homes in Loma Linda and Palm Desert, his horse ranch in Redlands, and Laguna Beach and Balboa Island, where he spent his summers.

He devoted the last 30 years of community service to the YMCA, because he believed in its work toward the betterment of the lives of children. To raise awareness and support for Family YMCA, he sponsored raffles and Beach Boys tribute performances at the Redlands Bowl and concerts in Palm Desert.

For kids, he hosted Ice Cream Socials at the Redlands YMCA. He also held special events for children at his ranch, where built a western-themed play town, hired cowboys to do trick performances and took tykes on train rides.

“It is so important to expose them to the fun things in life. If I can give a kid a pony ride or an ice cream and see them smile, it’s all worth it,” Doc said.

But it was the YMCA Children’s Christmas Parade that was his greatest joy for 42 years.

When Doc announced he was retiring from the YMCA’s executive board, fellow members refused to accept his resignation. Instead, they honored him as a lifetime emeritus board member and presented him with specially made YMCA tie. Doc was deeply touched by the gesture.

Those who wish to honor the memory of Dr. Van Voorhis are encouraged to donate to YMCA Youth Scholarships: YMCAEastValley.org/Doc-Van-Voorhis/

Doc loved big events and celebrations. At the time of his passing, he was planning 100th birthday party.

“He lived an amazing life,” his son Ron said. “He never wasted a minute. I think that’s why he lived so long.”