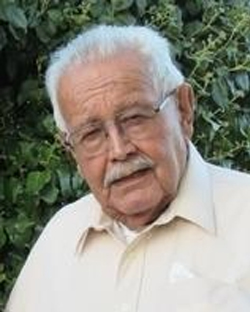 On March 27, 2020 Jesus received Dennis Henry Padilla to his Eternal Home at the age of 84. After one month of living with a fierce disease, he moved peacefully from the loving embrace of his family into the arms of our Heavenly Father.

Dennis was born on May 5, 1935 in Bakersfield, Ca. to Henry and Rose Padilla. He was raised in Bakersfield with his siblings, Dolores Gaitan of Syracuse, Ut., Katherine Cornejo, Richard and Rita Padilla, Sheila Chaidez all of Bakersfield, Ca., Roland and Rosie Padilla of Wichita, Ks., Sylvia and Jim Ramsey of Rathdrum, Id., and Conrad and Betty Padilla of Galt, Ca. He was the oldest son of 8 children.

He proudly served his country in the United States Army during the Korean War. After serving in the Army, he married the love of his life Anita Gutierrez. They were married for 63 years and God blessed them with 5 children, 14 grandchildren and 17 great-grandchildren.

Dennis was a long time resident of the Victor Valley area for 59 years. He worked at Contel for 26 years and retired in 1994. He served our community as a Coach with the Victorville Little League, Victorville Football League helping the youth. Dennis was a member of the Victorville Elks Lodge 1877 for 43 years where he volunteered tirelessly in many different positions. He laid down the foundation and volunteered for God’s Hand Extended, a local non profit.

He was a loving Papa to Christopher and Ashleigh Padilla of Elk Grove, Ca., Isaac and Melissa Padilla of Bakersfield, Ca., Tori and Angel Flores of Phillips Ranch, Ca., Amanda and Stephen Rabon of Castle Rock, Co., Ashlee Rodriguez of Grover Beach, Ca., Gary and Lulu Velarde of Victorville, Ca., Rachel and DJ Scorza of Long Beach, Ca., Joseph and Rashida Conway of Victorville, Ca., Gabriel, Arianna, Gianna and Katelyn Pineda of Apple Valley, Ca., and Daniel and Sofia Velasquez of Medellin, Colombia. He was adored by his 17 great-grandchildren.

Dennis was preceded in death and welcomed into Glory by his parents Henry and Rose Padilla, Isaac and Quirina Gutierrez and son-in-law Gary Pineda.

Dennis loved everyone and everyone loved him. Babies and children gravitated toward him, teens and young adults came to him for his wisdom, adults found a friend in him, and seniors called upon him for help. He showed compassion to the less fortunate and was a friend to all.

We shared our husband, Daddy, and Papa with so many people, and we did not mind because he had inspired us to love everyone without judgment. He had a sense of humor, and was loyal. He was a man of character, generosity and faith. He was admired and respected by the many whose lives he touched. There are not enough words that describe the man Dennis was. He is missed by all who loved him.

Pancreatic cancer did not win with pain and suffering or weeping, because the Lord reached down and took him home surrounded by his family. God was gracious and merciful to Dennis. O’ death, where is your sting? O’ death, where is your victory? But thanks be to God, who gives us the VICTORY through our Lord Jesus Christ. 1 Corinthians 15:55, 57

The family would like to thank our friends and family for the cards, phone calls, flowers and expressions of love during this time.