Written by Night For Vets on September 18, 2018. Posted in Gone But Not Forgotten 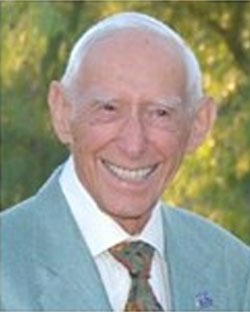 Dericksen Morgan Brinkerhoff, emeritus professor of the history of art at UC Riverside, passed away on August 12, 2018 at the age of 96 at Sunrise Senior Living in Canyon Crest. He taught at UCR from 1965 to 1991. He remained active on campus in retirement as a member and officer of the UC Riverside Emeriti/ae Association, the Council of UC Emeriti/ae Associations, the University Club, and the UCR Botanical Garden. An avid cyclist, Dericksen pedaled to the campus and around Riverside into his 90s. Beyond UCR, he served as a trustee for the Riverside Art Association, and along with his wife, Mary Weston Brinkerhoff (b. 1923, d. 2016) supported the Mission Inn Foundation as well as numerous other charitable causes.

Born in Philadelphia, October 4, 1921, to Robert J. and Marion (Butler) Brinkerhoff, Dericksen spent his early years in Ridgefield, CT. He graduated from Williams College in 1943 and joined the Army Air Corps for the duration of World War II, serving in India, Ceylon, and the Philippines as a cryptographer. Among his war stories was meeting Julia Child, the future famous chef and television personality, in Ceylon where she worked for the OSS.

In the summer of 1946, on a visit to an army buddy in Maine, he met and soon after married Mary, and started a family. Cars and camping were among his interests. He and Mary were early members of the Sports Car Club of America, and owned a series of exotic cars during his lifetime. Camping trips were a regular feature of summers for the family in the 50s and 60s, and once their four children were grown, Dericksen and Mary traveled on their own throughout California and the country in a succession of small motorhomes.

Dericksen pursued graduate studies in art history at Yale and Harvard, and taught at Brown University and then the Rhode Island School of Design. Upon winning a fellowship at the American Academy in Rome, he moved his family to Italy from 1959 to 1961 to pursue research on classical sculpture. After stints on the faculty at Penn State and Temple universities, he joined UCR’s Art Department as chair, having been recruited to start a graduate program in art history.

He was a gifted and inspiring teacher, dedicated to his students, and took a personal interest in their lives and subsequent careers. His popular art history courses were often enhanced by field trips: the Getty Museum for classical art, eastern orthodox church services for early Christian art, and these always included lively dinners at Greek restaurants. In the words of one of his former students, reminiscing at a department reunion, “Professor Brinkerhoff put so much energy in his lectures. He took us on many fieldtrips. He and his wife gave wonderful dinner parties.” Another noted that, “He made a lifelong impact on me. I cherish the memories I have of him and am a better person for having been his student.” He served as department chair several times during his tenure and was very popular with faculty and staff.

Dericksen, along with Mary, took an early interest in California’s wine industry and they were friends with many pioneering and boutique vintners throughout the state. They were active, and at times led, several wine organizations including the Inland Empire chapter of Les Amis du Vin and the Wine Society of Riverside. They organized many tastings and wine-paired dinners well into their 90s.