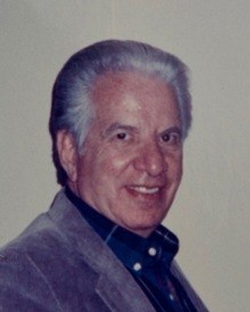 Domenic L. Fabiani, age 93, passed away on December 28, 2020 in Irvine, California. He was a victim of COVID-19. Domenic was born on Christmas Day, December 25, 1927, in Beaver Falls, Pennsylvania, to Domenic Fabiani and Jeannette Zingaro Fabiani. Domenic was married to Dolores P. Fabiani for 64 years; they were wed on April 23, 1955 in Beaver Falls. Following his graduation from Beaver Falls High School, Domenic served as a proud member of the United States Navy, stationed in Pearl Harbor, Hawaii. After his honorable discharge from the Navy, and throughout his life with Dolores together in Western Pennsylvania and then in Southern California, Domenic served as a police officer. He was a patrolman for the Beaver Falls Police Department. After moving his family to Southern California in 1962, he devoted the rest of his law enforcement career to the Ontario Police Department, serving from 1962 until 1986. Over his 24 years of public service in Ontario, Domenic held the positions of Patrol Officer, Detective and then Sergeant. While working as a police officer, Domenic attended evening classses and earned his college degree from Chaffey College in Rancho Cucamonga, California becoming the first member of his family to graduate from college. Following his retirement from the Ontario Police Department, Domenic continued to hone his skills and was an expert marksman who gathered with his dear friends every week to shoot skeet at the Rainbow Shooting Club in Fallbrook, California. Domenic also worked as a private investigator and served during his retirement as a long-time Examiner for the California State Review Panel charged with evaluating applicants to become California Highway Patrol officers. Domenic was an active member of the congregation of his local Catholic Church, and he volunteered regularly for the Knots of Love Charity, where he helped produce and deliver knitted beanies for cancer patients. Domenic is survived by his daughter Christine, his son Mark, and his grandchildren Geoffrey, Ian, Joseph, Isabella, and Lucca. Domenic was preceded in death by his wife Dolores, his father Domenic, his mother Jeannette, and his brothers Joseph Porcelli and Victor Fabiani.