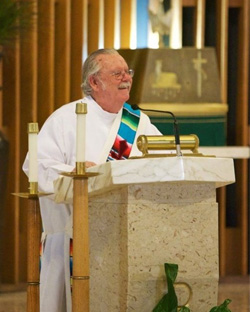 Deacon Don Burgett of Barstow died this Monday, October 19, 2020 at 2:15 p.m. from Double Pneumonia and Congestive Heart Failure. Deacon Don has been ill for the last two years due to COPD and Afib. His difficulty breathing caused great suffering and illness since Friday Morning.

Deacon Don just celebrated his 30th Anniversary of Ordination to the Diaconate on September 15, 2020. He was ordained as permanent deacon on September 15, 1990 at Our Lady of the Rosary Cathedral in San Bernardino by then Bishop Phillip F. Straling. Deacon Don has been a resident of Barstow since 1945 where he first started serving St. Joseph’s Catholic Church, (which was located on North 2nd Street), as an Altar Server, He has served his parish for 75 years of faithful service.

Deacon Don has also assisted in the parish communities of St. Philip Neri’s Parish, Barstow, Our Lady of the Desert Mission in Baker and St. Madeleine Sophie Barat Catholic Church in Trona. He has also assisted at the now-closed Baker and Boron Prisons, Rimrock Convalescent Home, and Barstow Veterans Home. He has dedicated his time and talent visiting the sick, the poor, home-bound and those that were hospitalized.

Upon graduation from Barstow High School in 1952, Deacon Don Burgett served his country in the United States Navy assigned to the U.S.S Antietam CVA 36 and the U.S.S. Tarawa CVA 40 during the Korean War. After returning home, he joined the Barstow Fire Protection District, first as a volunteer firefighter in 1956 and then as one of the first paid/career firefighters in 1958, retiring as Fire Chief in 1984. During his fire career; he earned the distinction of being named “Firefighter of the Year” in 1960 and 1980. In addition, Deacon Don was elected the Fire District Board of Directors for 3 – four year terms – serving the Barstow Fire Protection District for over 40 years. Also, Deacon Don was elected to the Barstow Unified School District for 3 terms during the 1970’s serving as Trustee and President through his term.