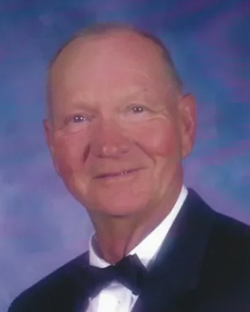 From Meridian Street, Los Angeles, to Majorca Drive, Rancho Mirage – what a life! Donald Lee Richardson, 89, of Rancho Mirage, California, passed away on June 14, 2022, surrounded by love and family. A California native, he was born to Frank and Helen Richardson on April 13, 1933, in Los Angeles. Don graduated from Franklin High School and enlisted in the Navy, becoming a technical engineer. He was married to Verona Wilcox, who he nicknamed Ronnie, in 1953; she survives him. Don and Ronnie attended the same schools from 7th through high school but never spoke until graduation practice when they finally got together. Don is also survived by his daughter Colleen McKay (Robert), and his sons Curtis Richardson (Patty), Craig Richardson (Patti), and Keith Richardson (Leslie), as well as nine grandchildren and 13 great-grandchildren. His parents and brother Russell predeceased him. Don and Ronnie moved back to Los Angeles from San Diego when he was discharged. His technical training earned him a position with more than one phone company, California Water and Telephone bringing him to the Coachella Valley in 1963. When the phone company changed hands, they wanted him to move back to the city. The family stayed in the desert, and Don tried several other things before he landed on his final career as the owner of a carpet supply shop. Don was involved in his community, belonging to active service groups and coaching his sons’ baseball teams for ten years. He played golf, tennis, and racket ball. Don and his family enjoyed skiing and boating at their property on the Colorado River with life-long friends from Los Angeles and their kids. Don and Ronnie vacationed with friends in Mexico, cruised to visit several countries, and enjoyed timeshares in the US and Mexico. No final service will be held at this time, but his family hopes you raise a glass with friends to toast his awesome life!