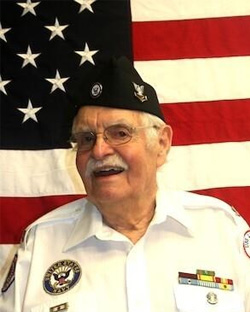 Donald E. Snyder passed away on July 12, 2020, in Palm Springs, California. Don was born August 25, 1931, to Edward and Caroline Snyder in Hollywood, California. He graduated from North Hollywood High School in 1948, and a year later joined the US Navy. He served during the Korean War on the USS Jason as an underwater welder and hardhat diver. Upon his discharge in 1953, he began work in the film industry as a Motion Picture Costumer and member of IATSE Local 705, where he specialized in military wardrobe for film and television productions.

Upon retiring in 1991, he and his beloved wife, Waltrene, moved to Del Webb Sun City in Palm Desert, CA. Don became an avid golfer and was a Marshall at the Bob Hope Chrysler Classic for many years as well as a docent at the Palm Springs Air Museum. He was very active in the Sun City Veteran’s Club, where he helped produce live shows celebrating veterans on Memorial Day and Veteran’s Day. He spent the last years of his life living at the Brookdale Mirage Inn in Rancho Mirage, where he remained very active pursuing his love of military and historical research and helping produce shows and presentations to entertain residents.

He is survived by his daughters Karen Axelrod and Kelly Schulz, son-in-law Mark Schulz and their son Michael, and his two nieces Shelley and Susan Swenson. He was preceded in death by his wife of 52 years, Waltrene, who passed in 2012. His love of life, sense of humor, and gentle kindness will be missed by all.