Written by Night For Vets on April 28, 2020. Posted in Gone But Not Forgotten 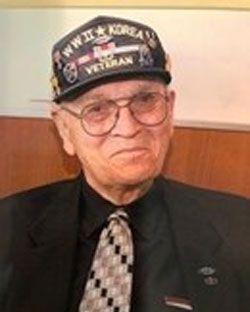 Age 95, of Corona, CA, passed away on March 29, 2020, of natural causes. Duane was born June 18, 1924 in Tulare, California to Theodore and Ernestine Whaley. He joined the Army in March of 1940, serving in WWII and the Korean War. He became a well-respected Master Sergeant and created lifelong friendships with the men with whom he served. He was nicknamed “Sarge” and carried the name and the cherished friendships with him until he passed. After serving our country, he went on to work for Safeway as a truck driver and became involved in the International Brotherhood of Teamsters, was active in several Masonic organizations and very involved in organizing Army Reunions. Duane was preceded in death by his father Theodore, mother Ernestine, wife Mary Jo, brothers, Dean and Leonard and stepson Stephen Toth. He is survived by his stepchildren, Kristen, David and James Swanson, nephew Matthew (Barney) Whaley, as well as 3 grandchildren and 4 great grandchildren. He was larger than life, loved by many, and will be missed by many. An incredible man.