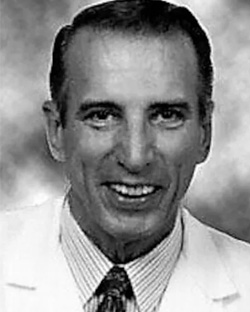 Dudley O. Scott Jr. was born on January 26, 1935, at California Hospital in Los Angeles to parents Dudley O. Scott, Sr. and Martha Neal Scott. Dudley attended Commonwealth Avenue Elementary School, John Burroughs Middle School and Los Angeles High School where he made life-long friends. At age 6 he began violin lessons and later became an accomplished violinist playing with The Los Angeles Youth Orchestra while studying under Iszchak Chernak. As a young boy he joined The Boy Scouts of America and went on to earn the highest achievement of Eagle Scout. While attending Los Angeles High School, he played basketball, and was a member of the school’s social club, The Gentry’s. He was chosen as a delegate to participate with the American Legion Boys State Program prior to his senior year.

Beginning his college education at 17, Dudley attended Stanford University. He completed his undergraduate degree in three years (1955) and graduated from Stanford University School of Medicine (1959) at the age of 24. There too, life-long friends were made. While at Stanford, he took part in the annual University-wide Spring Sing Competition. Under his direction, the nursing and medical students won the competition twice. After completing medical school he spent his internship at Santa Clara County Hospital (Santa Clara Valley Medical Center) before he enlisted in the United States Air Force where he served as a flight surgeon with the rank of Captain at Fairchild Air Force Base in Spokane, Washington. Returning home from the service, he completed his residency at San Jose Hospital (Regional Medical Center of San Jose) and became an Obstetrician/Gynecologist.

Dr. Scott began his private practice in 1965 in San Jose, California. While in the Air Force, during his residency and in private practice, he delivered more than 9,000 babies. He was a member of the American College of Obstetricians and Gynecologists, Shufelt Society, Santa Clara Medical Association and the Peninsula OB/GYN Society.

He retired from his OB/GYN practice and relocated to Palm Desert where he continued practicing medicine as a primary care physician for Desert Oasis Healthcare-Sun Life Medical Group. There he joined colleagues Drs. A. Gregory Caruso and Robert A. McPeake to care for the local community.

He enjoyed photography which he put to good use while traveling and attending sporting events with his wife Lynda. They enjoyed many trips and adventures together. Their favorites were weekends in Pebble Beach and the numerous trips to New York City where they attended Broadway shows, walked endlessly around the city, all the while seeking out the next greatest restaurant. The Nikon was put into full-time use with the arrival of their seven grandchildren.

During his time in Spokane, Dudley discovered the excitement of ice hockey. His son, Darin, became an avid player and they shared the love of the sport. It was a wonderful bonding experience for father and son to spend many hours traveling together to ice rinks in northern and central California as well as trips to Canada for additional tournaments. Dudley served as President of the Northern California Youth Hockey Program. And, finally, with the arrival of the NHL professional hockey team, the San Jose Sharks, Dudley’s prayers were answered. Hockey had come to his doorstep.The family wishes to acknowledge the wonderful team of physicians, nurses, and staff, at Desert Regional Hospital for their excellent and compassionate care. A heartfelt, thank you to Maria Paz, Dudley’s caregiver of five and half years, who made his day-to-day life more enjoyable.