Written by Night For Vets on January 9, 2023. Posted in Gone But Not Forgotten 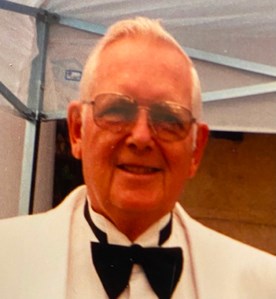 July 23, 1928 – December 23, 2022 Dwane Earl Mickelson, a devoted husband, father, veteran, teacher, and hobbiest, passed away at the age of ninety-four. He is survived by his wife, three children, nine grandchildren, and five great grandchildren. Dwane, the oldest of two brothers, was born on July 23, 1928 to Miller and Mae Mickelson of Fort Dodge, Iowa where he attended high school and played two instruments in the marching and concert bands. After graduating from Iowa State Teachers College and Drake University, he married Janice Mary Anthony of Sioux City, Iowa and they moved to Riverside, CA. Dwane was a conductor and band teacher in the Riverside Unified School District for over thirty-five years. He also was a Colonel in the United States Army Reserve and served on the All Saints Episcopal Church lay-clergy for many years. Dwane loved the beach, sailing, raising orchids and playing in the Riverside Concert Band. He also met with the ROMEO (Retired Old Men Eating Out) Group on a regular basis and enjoyed playing bridge.