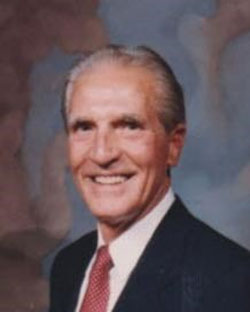 Earl was born in Martins Ferry, OH and spent his early years working in the family business. He was very involved with the Boy Scouts and became an Eagle Scout in 1934. He enlisted in the Army Air Corps in September 1939 for training as an aircraft mechanic. After training, his first assignment was March Field, CA. His unit then moved to Albuquerque, NM. There he became a member of a B-17 aircraft crew. His crew was reassigned to the Philippine Islands and departed to that destination on the evening of December 6,1941. Upon arriving in Hawaii early on the morning of December 7 his aircraft was met by Japanese fighter planes which set his aircraft afire causing it to crash land on Hickum Air Field, Hawaii. After surviving that crash, Earl went on to fly 55 World War II combat missions in the South Pacific for which he was awarded The Distinguished Flying Cross. Earl was given a direct commission. On his return from the South Pacific and during his 30 year career in the U.S. Air Force he held many positions from commanding several Air Force units to staff division chief and eventually Vice Commander of the 390th Strategic Missile Wing in Tucson, AZ before retiring from the Air Force October 1, 1969. Earl was married to Lorraine Hitt from San Bernardino, CA from 1943 until her death in 1989. They are survived by a daughter, Candace Baker, O’Fallon, IL and a granddaughter Lara Robertson, Maurepas, LA. Earl was married to Judith Sensenbach from Riverside from 1995 until her death on April 7, 2020.