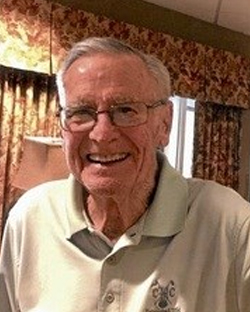 September 2, 1930 – September 7, 2021 Edgar Frank Losee, age 91, passed away on September 7, 2021 in Redlands, California. Ed was born on September 2, 1930 in Houston, Texas to William H. Losee and Millie Grace Losee, but grew up in Monrovia, California. Ed was a graduate of Monrovia High School where he was elected student body president, was a Boys State Representative, and was a guard on the all-league first team in football. After graduation, Ed joined the Air Force where he served for four years as a Gunner on a B-29 and as a Boom Operator on a KC-97 doing air fueling. Ed then received his Bachelor’s Degree from the University of Redlands. He went on to work for the Redlands Unified School District as a Teacher, Principal, Curriculum Coordinator, and Assistant Superintendent. In his spare time he enjoyed gardening, playing golf, traveling, and dancing. Ed served as the president of Kimberly Crest and Family Services. He was a member of Fortnightly, Supper Club, and the Redlands Country Club. He is survived by his wife Bettie Platz Losee; children Lyn Losee Flood and her husband Steve Flood, Carolyn Losee Knotts and her husband Randy Knotts, Kristie Platz Coberly, Lisa Platz Brown and her husband Berry Brown, and Kirk Platz; and numerous grandchildren. He is also survived by his daughters-in-law, Renee Losee who is the widow of Buddy Losee and Ann Platz who is the widow of Gary Platz. He was preceded in death by his first wife Bonnie Chambers; daughter Gayle Losee; and sons Buddy Losee and Gary Platz. He will be deeply missed by his family, friends, and all who knew him.