Written by Night For Vets on February 12, 2021. Posted in Gone But Not Forgotten 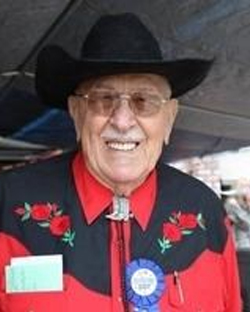 Edward Christian Feilen passed away of a heart attack at the age of 94 on January 21, 2021 at 8:30 a.m. at Loma Linda Hospital in Murrieta, CA. Edward (Eddie) was preceded in death by his first wife Edna, two children Eugene and Cindy, parents – Thomas and Mary, and 9 brothers and sisters Mathias, Karl, Irene, Thomas, Leona, Leo, John, Mary and Joseph. His brother Henry passed away in Minnesota on the same day. He is survived by his beloved wife Dina, children Linda (Egging), Thomas, and Michelle, stepchildren Rosie, Annette, Veronica, Jesse, Larry, and two brothers, Raymond (CA) and James (MN) and 6 grandchildren-Dennis, Danielle, Jacklyn, Robert, Edward Thomas, and Kevin. Eddie lived life to the fullest. He was born in the County of Deuel, in the City of Clear Lake (Goodwin), South Dakota and raised in Herman, Minnesota and grew up in a family surrounded by music Country and German playing the guitar, harmonica and singing. He played a mean game of pinnacle, along with enjoying puzzles and sports, such as softball and baseball. Being a large family, the Feilens had enough people for a team. Many family picnics were filled with fun and laughter. However, when duty called, Eddie joined the military and he served in the Army during World War II. He was married to Edna (Young) for 54 years and when his family of 4 children were small, he followed his dream of moving to California where he established his residence in the Santee area. His career was in construction, first in terrazzo flooring and then became a General Contractor. He contracted with many homeowners to do remodeling work throughout San Diego County. He was a lifetime member of the VFW and played in several pool tournaments in Santee where he was known as the “sharp-shooter.” Eddie was also a member of the Elks in Hemet and a member of the Knights of Columbus. He was a Catholic who helped build the Guardian Angels Church in Santee. His biggest enjoyment was hunting, camping, and fishing. He loved hunting and camping with his sons, grandsons, and hunting partner Manny. After his first wife passed away, he found his soulmate and married Armandina (Dina) Loza. They established their home in Hemet, CA where they shared 15 beautiful years together. Dina kept his youthful life going through dancing and maintaining a healthy lifestyle. His remains will be placed in Riverside, CA at the VA Riverside National Cemetery.