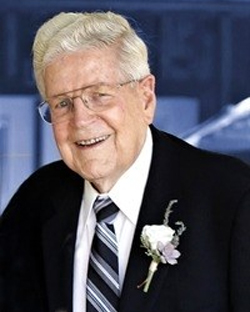 Beloved father, grandfather and great-grandfather, Ed went in peace to be with the Lord on October 10, 2022 at the age of 97. He was born in Boone, Iowa on April 19, 1925 and then moved to Pasadena, California with his parents, Charles and Emilie (Ehmann) Goeppinger and two older brothers Albert and Howard. During World War II, he was drafted into the Army on his eighteenth birthday and after basic training he was selected for the Army Specialized Training Program (ASTP) at Texas A&M. However, with the European invasion, the Army needed combat infantrymen so they closed the program and assigned him to the 12th Armored Division. He was committed to combat on December 7, 1944 and fought in the Battle of the Bulge, Battle of Colmar Pocket, the Rhineland Campaign with Patton’s Third Army crossing the Rhine River, and with the 7th Army’s Central Europe Campaign. He returned to the States in April 1946, completed his studies in engineering at UCLA and UC Berkeley and was licensed as a Professional Mechanical Engineer in the State of California. He began working in Pasadena at Bourns Laboratories, a start-up electronics company, as one of their early employees. The company moved to Riverside in September 1950 and during his 40 year tenure he worked as an engineer, salesman and corporate officer seeing the company grow into one of the largest in Riverside with worldwide offices. Ed met the love of his life, Trudy in Pasadena in 1949 and they were married 3 years later enjoying 65 years of marriage until her passing. They were active members of Immanuel Lutheran Church in Riverside and Ed spent many hours with various committees and church activities. As a businessman with a vision for the growth of Riverside, he was involved in many land development projects in Riverside and surrounding communities. Ed is survived by daughter Jane and her husband Vit; grandson Tomas and his wife Maggie and daughter Mila; grandson Vit Jr. and his wife Jana and children Nicole and Edward. He is also survived by sisters-in-law Margaret and Elaine, Elaine’s husband Phil and numerous nieces and nephews along with their families.