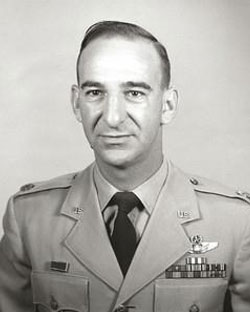 Lt. Col. Edward R. Regis, of Riverside, CA, passed away peacefully on April 28, 2020. He was born on January 29, 1923 in Rimersburg, PA. The son of Joseph and Margaret Regis, who along with a brother and two sisters, wife Mary Light and wife Betty De Camp predeceased him. Edward resided at Westmont Village Retirement community, formerly Air Force Village West, since 1990. Col. Regis resided in Rimersburg until he entered the U.S. Army on March 29, 1942. He attended Union High School where he lettered in football, basketball, and graduated with honors. He was commissioned 2nd Lt. on May 20, 1943 upon completion of Pilot training and was assigned to the 354th Fighter Group, the WWII Pioneer Mustang Group. During 31 missions in Europe he was credited with three enemy aircraft destroyed. He was shot down on April 26, 1944 and spent a year and three days as a POW. Subsequently, he was an instructor pilot until released from active duty in January 1947. He and his wife Mary resided in Litchfield Park, AZ where he worked for the Goodyear Tire and Rubber Co. until recall to active duty in September 1947, when he was tendered a regular commission as a 2nd Lt. in the U.S. Army Air Corps. He subsequently held various command and staff positions in the 31st, 388th, and 49th Fighter Groups, was a liaison officer to the Atomic Energy Commission, Assistant Commander of the 6571 Aeromedical Research Laboratory and Technical Assistant to the Director of Biotechnology and Human Research, Headquarters NASA, prior to retiring from the Air Force in March 1966. He attended various schools including Air Tactical School, Purdue University, USAF Institute of Technology and Western State University College of Law. Col. Regis worked for McDonnell Douglas Space Systems in Huntington Beach, CA for 17 years during which time he was a senior engineer/scientist and program manager. He retired in 1981, in Huntington Beach, CA. After his wife’s death he moved to Air Force Village West where he met and married Betty, and thoroughly enjoyed a life of leisure. His decorations include the Silver Star, Air Medal with 5 clusters, Commendation Medal, POW Medal, Unit Citation and 5 campaign ribbons. He was a 3rd degree Knight of Columbus and a member of the VFW, American Legion, Daedalians, American Ex-POWs, and Retired Officers Association. Edward was much loved and will be missed by friends and family members.