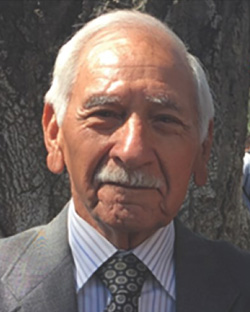 Edward Reynosa Edward “Ed” Reynosa, a 64-year Redlands resident, passed away on July 28, 2020 after losing his extended battle with prostate cancer. He was 89 years old and died at home with his family by his side. A native of Colton, California, Ed graduated from Colton High School in 1949 and attended San Bernardino Valley College. Ed married his high school sweetheart Connie Beltran in 1950. Family and friends have often commented that Ed and Connie’s marriage served as a lesson to them of what a loving, long-term relationship should be. A veteran of the U.S. Navy, Ed served from 1950-1954 aboard the U.S.S. Washburn during the Korean War. After discharge he began his 35-year career of civil service. He then worked on the Navy’s Minuteman Missile Program. He was later transferred to Northrop-Grumman and eventually returned to the Department of the Air Force at Norton. His final Federal Government position was as the Quality Assurance Specialist for the SR-71 “Blackbird” (Strategic Reconnaissance) aircraft. Upon his retirement he was presented by the crew of the Blackbird, two American flags which had been flown at Mach-3+. Ed enjoyed many hobbies, but his #1 devotion was to his family and he was always eager to lend his support to their school and sports activities. He was a past president of The Redlands Benchwarmers and was also their Marshall Phelps Award recipient. He was a member of the Redlands Elks Club; American Legion Post 650; a Junior All-American Football coach and usher at Sacred Heart/Holy Name of Jesus Church. He also enjoyed playing golf, gardening, and being a jack-of-all-trades at home. Ed is survived by his daughters Evelyn Lujan (James) and Melinda Fitzmaurice (Thomas); four grandchildren Andrea Craft, Brian Lujan, Celina McKernan, and Sarah Fitzmaurice; seven great grandchildren; Cole, Dane, Mira, Cruz, Mari, Connor, Katelyn and soon-to-arrive great-granddaughter Fitzmaurice. He is also survived by siblings Gloria, Manuel, Barbara, Margo and JoJo, as well as a large extended family. He was preceded in death by his wife of 61 years, Connie and his mother, Celia Raya, and father, Manuel Reynosa. Ed’s family wishes to extend our heartfelt thanks to his loving caregiver of six years, Victoria Ibarra, as well as Julian and Maria for their faithful service to our beloved Daddy, Grampa and Papa. We also extend sincere thanks to Redlands Community Hospital Hospice.