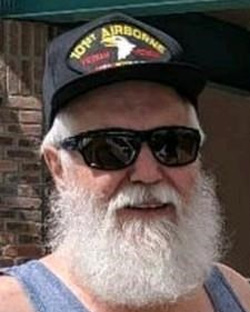 Emmett was born December 4, 1950 to Edward Elliott and Helen Bell (Edwards) Wall, who preceded him in death. Emmett passed away at the age of 69 in his home with his wife, Shelley and his son, Robbie, by his side. He graduated in 1969 from Norte Vista High School, Riverside CA and he played baseball and basketball, GO BRAVES! Emmett gave of himself serving his country in the Vietnam war, U.S. Army 101st Airborne E4 Specialist 3rd Battalion 187th Infantry. He loved God, his family, and his country! He always told his family he loved them! He was married to Marilyn Green in 1970 in which he had his first daughter, Elizabeth, who has five children and three grandchildren giving Emmett his first great grandchildren. They divorced in 1986. In 1987 he married Margaret Cormack in Lake Tahoe. They had four boys and one stepson. Margaret preceded Emmett in death on June 30, 1998. He then married Shelley Kroening on January 14, 2017 in which they enjoyed his last years together attending church, reading the Bible, (he read the Bible through 8 times), attending hockey and baseball games, and enjoyed their times in the outdoors! He had a passion for sports and was an avid fan of the LA Dodgers at an early age and later was a season ticket holder of the Ontario Reign professional ice hockey team based in Ontario, California. He attended games with family and had a large collection of baseballs caught and signed by the team! But coaching his sons in Little League and baseball at Riverside Christian High School was what brought him happiness and attending his stepson’s band performances. It was one of his great joys in life. Emmett worked as a truck driver for the family’s company, Wall’s Hauling Service from 1975 to 2009. He would rather have been a Forest Ranger but always happy to be with and help the family. At an early age Emmett was baptized by his grandfather, Reverend Edward Elliott Wall, Sr. He attended church regularly at Victoria Community in Riverside with his sons, his mother, Helen, and sister Carol Hunter. Emmett rededicated his life to the Lord while attending Victoria Community Church. When his church relocated he attended Harvest Christian Fellowship Church in Riverside with his family. He volunteered to help with the Harvest Church New Zealand Crusade with his sons, Robbie and Ian in June of 2011. He even considered a move to New Zealand some day where there was little crime and a beautiful country! Emmett loved traveling with his sons and sister, Carol, (who was the second driver if needed and bought snacks for everyone) on several road trips seeing all the National Parks, and other sightseeing stops! They took lots of pictures, had long days of driving but he never complained. He was just happy he could share the United States of America with his sons. He was a proud American! His cousin, Patricia K. Horsley Salsman, Fresno, CA remembers him as always being the nicest person whenever they included her in their trips to several places in the states when she was a child. They were the same age with Emmett being a few months older! They went to her house to stay and swim and the Horsley’s went to Riverside and always went to Disneyland. Great times with these two families throughout the early years. He is survived by his wife, Shelley Kroening Wall; five sons, Eddy Wall and his wife, Autumn from Meridian, Idaho; Christopher Wall and Alexandra Torres, Riverside, CA; lan Wall and Robbie Wall, Riverside, CA, Bill Preci, (stepson) and wife, Charlotte, from Homeland, CA; three daughters, Elizabeth Montero and husband, Greg from Riverside, CA; Ashley Gonzales and husband, Gerardo, from Corona, CA; Nicole Briggs (stepdaughter) and husband, Beau, from Rancho Cucamonga, CA; 19 grandchildren and three great grandchildren. He is also survived by one sister, Carol Wall Hunter, two brothers, David and Robert Wall, Riverside, CA. Emmett will be missed by his family and extended family!