Written by Night For Vets on November 14, 2018. Posted in Gone But Not Forgotten 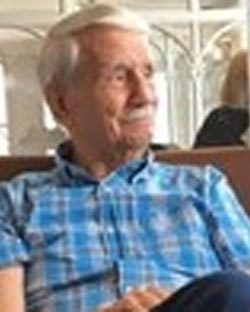 Edwin Antoine Doucette, 87, passed away Oct. 30, 2018, in Riverside, California. He was born in Lynn, Massachusetts, to Barney and Frances (D’Eon) Doucette on Feb. 17, 1931. He graduated from St. Jean Baptiste Catholic School in 1948 and subsequently joined the U.S. Air Force.

While stationed in England, Ed met the love of his life, Ruby (Adams), and they were married for 66 years. They had six children and lived in Massachusetts, England, Nebraska, Texas and California over the course of his 20-year Air Force career. During this time, Ed also earned a Bachelor’s Degree from the University of Nebraska, Omaha. Upon leaving the military, he opened a Pronto Print business in Riverside before joining the Social Security Administration, where he worked until retiring in 1993.

Ed enjoyed photography, volunteering, cheering on the Boston Red Sox, watching and betting on horse races, traveling and being with his family. He and Ruby visited relatives often in England, Massachusetts and Nova Scotia, Canada; they went on cruises in Alaska, the Caribbean, Hawaii, Australia and most recently the Pacific Northwest; and made frequent jaunts to Reno, Las Vegas and Laughlin, Nevada. Ed is survived by his loving wife, Ruby; his sons Andrew (Kymberly) and Robert; his daughters Elaine (Jim) Adams and Carol (Russell) Hilbig; six grandchildren; and seven great-grandchildren. He was preceded in death by his sons Stephen and Jeffrey.