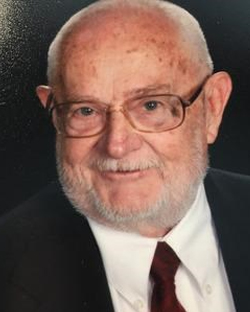 Son of the late William and Marie Macklin, born in Trivolli, Illinois on November 16, 1934. Went home to his Lord and Savior August 12, 2020 in Riverside, California. He was preceded in death by his beloved wife, Mary Lee Macklin; their son, Stephen Macklin and a sister, Corda Jones. He is survived by his son, David (Rebecca) Macklin, five grandchildren, Cassandra (Scott) Alexander, Brandy (Joshua) Dawson, Cory (Toni) Macklin, Joshua (Stacey) Macklin and Brent Macklin, 11 great grandchildren, numerous family members and dear friends. Edwin graduated from Farmington High School (Illinois), he was a member of the US Navy, proudly served aboard the USS Lexington. A 1962 graduate of Western Illinois University, where he earned his Bachelor of Science Degree, it was there he met Mary Lee Jones, they married on April 28, 1959. They moved to California in 1962 and lived in the Los Angeles area. The family moved to Riverside in 1990. Edwin retired from the Title Insurance Industry, and he still has many friends from those years. He was a member of Magnolia Church in Riverside, where he faithfully served as a Deacon, Sunday School Teacher and a Member of the Benevolence Committee.