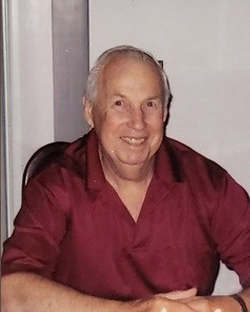 January 18, 1931 – September 21, 2021 Eldon G. Smith was born in Tulare, CA to Juanita and Lynn Smith as the 3rd of their 4 sons. Growing up in the Los Angeles area, Eldon enlisted for 4 years in the U.S Navy at 17 yrs of age. He then served the City of Vernon as a motorcycle Police Officer for 19 years. In the early 70’s he met the love of his life, Juanita Peralta. They shared a passion for bowling and a deep faith of our Lord and Savior. They married in 1974 and he gained 2 (step) children, John Medrano and Patti Hartman. Eldon deeply loved his family which grew to include 6 grandchildren and 7 great-grandchildren. He loved to be active, whether it was on the golf course with his friends and family, or out in the garage "tinkering" with his tools, being the handyman of the family. He also volunteered with the local chapter of The Gideons, sharing the word of Christ with many students at the local high schools. Eldon will be incredibly missed by the people that knew him best – his contagious laughter and unwavering faith in Christanity was and will remain, a pillar in the family. Both parents, his stepfather and 3 brothers preceed him in death. Surviving family members include his loving wife, Juanita Peralta Smith, Bloomington; sons Eldon L. Smith, of OK and John L. Medrano (Lisa) of Fontana; and daughter, Patti Hartman (Thomas) of Round Rock, TX; 3 Grandchildren in TX; 1 in Co; 2 in Fontana; 6 Great-Grandchildren in TX; and 1 in Fontana.