Written by Night For Vets on January 8, 2021. Posted in Gone But Not Forgotten 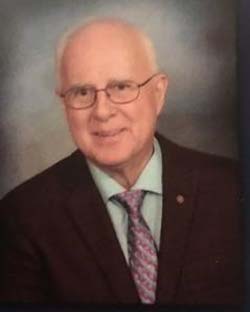 A true Murrietaian passed away on Monday, December 28, 2020. Eldor “Al” Vollbrecht was born on September 24, 1942 in Minnesota where he grew up and attended Mankato State University receiving a BS in Political Science. Al served in the United States Air Force from 1964 to 1968 as a Staff Sergeant (E-5) at Lajes AFB in the Azores. Al met President Johnson, and remained in close contact with barrack mates for over 50 years. Working as a journalist for the Mankato Free Press and later the Director of the Chamber of Commerce in Longmont, Colorado, Al began his hard work for communities he was a part of later working for the City of Carson before becoming Communications and Public Information Officer for the City of Murrieta in 1992, less than one year after the city’s incorporation. Residents will have seen Al’s handy work in many projects but most notable was the inaugural Push Cart Parade from the Community Services Department. If you knew Al, it was probably from Murrieta’s oldest family-run restaurant in town, Honeycutt, where staff and customers knew him and his order by heart, or through the Rotary Club of Murrieta. Al was a strong presence in the Rotary having a hand in many projects, including but certainly not limited to: Sister Club, Children’s Health International Projects (CHIPs) where Al traveled on medical missions for surgical repair on cleft lips and palates for children in need, and the Field of Honor (field of flags) and the Chalk Walk which can be seen every November at Murrieta Town Square Park. Al’s work will still continue as the Walk Through Time Historical Monuments are still being designed. Al was also a board member of the California Chamber Orchestra, member of the California/Nevada Festival & Events Association (CalFest), Murrieta Cemetery board, and a board member for the Murrieta Valley Historical Society where Al used his experience to obtain donations that helped the society open up Murrieta’s first official history museum. He leaves those he cherished: brother Keith Vollbrecht and sister-in-law Marsha, Waseca, Minnesota, sister Carla Southworth and brother-in-law Tom from Medford, Minnesota, nephew Shaun Southworth and his wife Heidi, niece Michelle Southworth and great-nephew Jacob McHenry of whom Al was very proud. Al was preceded in death by his parents, Eldor and Viola Vollbrecht. Al chose to be released from the hospital on December 28, and returned to his home where his partner of 10 years, Yojiro “Jiro” Iba, held him while he looked out into his most beloved garden. Al and Jiro have spent their time traveling around the world including Jiro’s hometown of Hiroshima, Japan and most recently (before shut down) to New Zealand and Australia. They enjoyed gardening and attending many concerts and performances together. Jiro will always remember Al being his bravest at the end of his life. Al was cherished by so many in this world and his memory and hard work will live on through his dedication to his communities. May your soul rest in eternal peace. Let us continue the work.