Written by Night For Vets on November 21, 2022. Posted in Gone But Not Forgotten 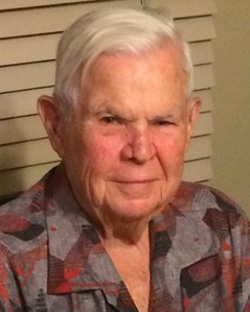 November 4, 1926 – September 12, 2022 Elmer (Ed) was born in Coachella, California and passed in Murrieta, California. He was happily married to Marian Louise Badgley for 64 years before her passing. He is survived by his three children and their spouses, seven grandchildren, and two great grandchildren. He graduated from the Merchant Marine Academy at Kings Point. New York, and went on to serve in the U. S. Navy during the Korean War as a Lieutenant. Ed had a long, successful career in the aerospace industry. He worked for Rockwell International/Boeing for 35 years as a highly regarded test engineer. Ed attended St. Paul’s Presbyterian Church in Anaheim and is currently a member of Grace Presbyterian Church in Temecula. He is an ordained elder and deacon in the Presbyterian Church (U.S.A.) He was an accomplished bridge player, enjoyed traveling, and spending time with family and friends throughout his lifetime.