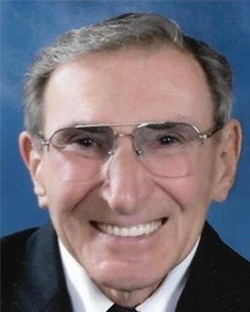 Enrico E. Bianco, 90, of Upland, California, passed away on December 19, 2020. He was born in Monrovia, California on August 13, 1930. Enrico graduated from Chaffey High School in 1948. He was married to Betty Coragliotti on May 23, 1954. During the Korean War, he enlisted and served for three years in the California Air National Guard, served in Okinawa for 11 months, and received the California Federal Service Ribbon. Enrico worked in the aerospace industry for most of his life. He was employed by Aerojet General for 20 years, and then by Brunswick Corporation (Defense Division) for 13 years. One of the rockets he worked on, the Aerobee 170, is in the National Air and Space Museum of the Smithsonian Institution in Washington, D.C. He loved all animals and had a passion for woodworking; he especially enjoyed carving animals. One year, he submitted three of his carvings for competition at the Los Angeles County Fair, and received three blue ribbons. He also enjoyed traveling and cruising with his wife Betty, with his sister-in-law Helen Blasco and her husband Don Blasco, with his son Mark and daughter-in-law Debbie, and with his daughter Lynne and husband Vincent and his grandchildren. His greatest joy, however, was being with his family, and taking pride in their accomplishments. Enrico is survived by his wife of 66 years, Betty; his son Mark Bianco; his daughter Lynne Bianco Belusko and son-in-law Vincent Belusko; his grandchildren Kurt Belusko, Luke Belusko, and Allyn Belusko; his sister Pierina Pascolati; and a large and loving extended family.