Written by Night For Vets on May 29, 2020. Posted in Gone But Not Forgotten 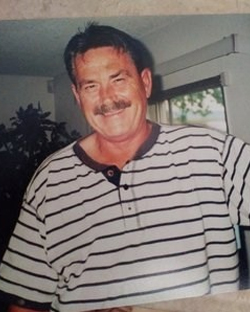 Eric Allen Larsen passed away May 7, 2020 at his home in Banning, California, after a 4 year battle with pancreatic/lung cancer, with his wife Cheryl by his side. Eric was born in Green Bay, Wisconsin to his parents Gerald and Emily Larsen on February 12, 1947. As youngster, his grandparents had a huge influence on his life. His grandpa taught him about the honey bee business, how to hunt and alot about cars. Of course living in Green Bay, he became a true Green Bay Packer fan, which carried on throughout his life. Go Pack Go! His parents moved the family to Covina, California where Eric went to high school. After graduating, Eric was drafted in to the U.S. Army and served our country in the Viet Nam War. After returning from the war, he later married his first wife Diana,who had a 2 year old daughter, Heather. They later had a son together named Dean,( who predeceased Eric at the age of 11). Those kids meant the world to him, especially Dean. Eric spent his career as a Route salesman for Oroweat Baking Company, which lasted 34 years. During that time he met the love of his life, Cheryl (who also worked for the same company). They married in February in 2000 and made their permanent residence in Bannning, California in 2002. Eric’s other true passionate love was hunting. He would count the days until hunting season opened. He was in seventh heaven when that day arrived. After he retired in 2008, he continued that passion, along with football season. During the off season of hunting and football, he was such a great mentor to both young and old. Someone that he mentored along the way, once called him a “Gentle Giant”. He was always willing to help others with projects, working on cars, just doing anything for anyone that needed a helping hand. He was such a great story teller too, whether it was something he experienced or just a movie he’d seen, those stories made you feel as though you were there. Eric will be truly missed by those lives he touched throughout his life. Eric was predeceased by his son Dean, his brothers Curt and David, his parents and grandparents. He is survived by his loving wife Cheryl, his sister Peggy, his brother-in-law Ralph, his sister-in-law Pam, many cousins, nephews and nieces, his ex-wife, her daughter and grandchildren, extended family, friends and great neighbors. Rest in Peace my love, until we are together again.