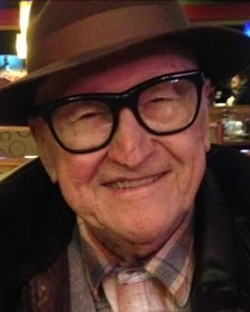 Colonel Eugene (Gene) L. USAF retired Blanck Thoroughly enjoyed 99 years of life (9 was his favorite number) until November 10, 2020 when his heart would no longer sustain his blood pressure at the very busy (at the time) Loma Linda University Medical Center cardiac ICU. Due to covid-19 restrictions at the Riverside National Cemetery (22495 Van Buren Blvd., Riverside, CA), Gene’s internment (and reunification with his wife, Frances) was delayed until August 2. 2021, at 2:15pm sharp (the day after what would have been his 100th birthday) since attendee number limitations were lifted. The service will include full military honors and a Masonic ceremony. Gene was born in Baltimore, Md to Austrian and German immigrants sent to America at ages 11 and 9 to escape NAZI fascist tyranny prior to WWI. The family regularly played music and sang together. His twin sister was stillborn and he had an older brother Max, who he fought back to back with in neighborhood brawls. He started working at age 9 due to the Great Depression and the disabling injuries his father received fighting Germany in WWI. In 1942, Gene graduated University of Baltimore Law school with Spiro Agnew and Donald Schaffer (Maryland Governor and Baltimore Mayor) and was promptly drafted as a Buck Private in the U.S. Army Air Corp. After lining up 4 times to board troop ships headed to Europe, the military bureaucracy discovered his law degree and pulled him out of line. Gene served as a Judge Advocate General (JAG) for 32 years including the creation of the U.S. Air Force until 1974 through WWII, Korea and Vietnam. Much of his WWII assignment was in Alabama where Fran was his secretary until they married in 1946. Next duty station was Clark Air Base, Philippines where they strapped a 45 on his belt for Japanese combatants still in caves, ignorant the war ended. Gene was stationed in Minneapolis, MN and traveled through snow to Distant Early Warning (DEW) radar and missile sites constructed for the Soviet Union Cold War. His only son (Lou) was born there. Then Fran and Lou returned to her home in Alabama while Gene was stationed at scenic secret bomber base Thule, Greenland while the Sputnik launch came over. Gene thawed at the next duty station in Orlando, FL just in time for the Cuban missile crisis. Then Gene worked for General Curtis LeMay at Westover bomber base in Massachusetts when JFK was assassinated. His next assignment was the Air Force Top Gun judge at Tyndall Air Base, Panama City, Fl. Subsequently, as Judge to Space Force predecessor, Gene was stationed at Vandenberg Space Base. Next job was judge at Wheelus Air Base in Tripoli, Libya, just in time for Quadaffi to take control with Soviet assistance. Finally Gene returned to Redlands, CA, USA to be the Air Force Inspector General Legal Advisor starting the first Freedom Of Information exemption (decided by the Supreme Court) for aircraft accident reports. He is known in the service for the cigars he chewed, but rarely smoked. Gene enjoyed retirement with some tennis, lots of golf and more TV. He cherished fellowship with his Masonic, Blue Lodge, Scottish Rite, York Rite, Shriners, Sojourners and MOWW brothers carrying on with a tradition he started when stationed in the Philippines.