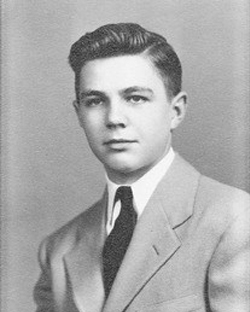 Gene Knauer passed away surrounded by family on December 19, 2020. He was born in Austin, MN where he attended St. Augustine High School with his four brothers. After graduating in 1946, he enlisted in the U.S. Army. As an MP, he was sent to Japan to guard Emperor Hirohito following WWII. Upon his return he attended Loras College in Dubuque, IA and graduated from the University of Minnesota with a degree in Political Science. He met his wife Theresa in March 1956 and they were married in December 1957 in Sioux Falls, SD. He moved his family to Alta Loma, CA in 1969, where he remained for the rest of his life. He was a founding parishioner of St. Peter & St. Paul Catholic Church where he was involved in many activities throughout the years. He retired in 1995 after a long career as a corporate credit manager. He enjoyed golf, working in his yard and doing crossword puzzles. He was preceded in death by his older brother Don. He is survived by his wife of 63 years Theresa; his children Mike (Judy) Knauer of Camarillo CA, Dan (Pam) Knauer of Warner Robins GA, Suzanne (Greg) Teague of Upland CA, Annette (Jeff) Freymueller of Okemos MI, Carol (Mike) Cales of Highland CA and Janet Knauer of Chicago IL; 9 grandchildren and 4 great-grandchildren; and his younger brothers Tom, Bill and Jack.