Written by Night For Vets on November 24, 2020. Posted in Gone But Not Forgotten 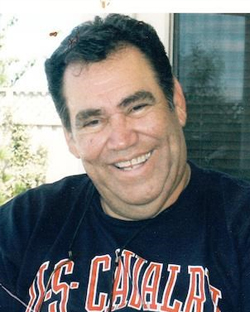 Eugene Ramon Prieto was born in Palm Springs on August 20, 1938 and passed away November 12, 2020. He grew up in a strong family influence, living where most were family members. Eugene learned English at Frances Stevens Elementary, then moved to Katherine Finchy Elementary, graduating to Nellie N. Coffman Junior High in 1951. He then went to Palm Springs High School and became athletically active, lettering all four years in football and track & field; some records remain unbroken in track. Upon graduating in 1957, Eugene joined the U.S. Navy, active duty to 1961, taking a basic electronics and radio course that provided communication supervisor duties for an 18 ship squadron: he attained the honorable discharge grade of E-5.

He married in 1960 and had four children: Rebecca, Lorraine, Margaret and Edmond. Leaving the Navy, he worked in Palm Springs as a police officer. He also was a Boy Scout Master for St. Theresa’s Troop 118 and they attended the 1969 International Jamboree at Farragut State Park, Idaho. Attending College of the Desert, Eugene completed his AA degree, transferring to Cal State Los Angeles, receiving his BA in Physical Education with a strong minor in Social Science; he acquired employment with Montebello Unified for 11 years teaching Social Science and coaching football and track & field. In 1983, he accepted a position at Banning High School as a Resource Specialist.

Attending National University for two years, he received a Master of Science in Special Education and also a Learning Handicapped Credential. He taught Social Studies and U.S. History in the Coachella Valley Unified School District, started an ROTC Cadet Program and later retired.

Through his early years he was a member of the U.S. Army Reserve and later the U.S. Air Force Reserve.

All his life he was close to his extended family members in Palm Springs. Eugene was also a member of the American Legion Post 519, at one time serving as Vice President. He was instrumental in helping name the main club room for his Uncle Raoul Prieto, who served in World War II U.S. Air Force, perishing over Germany in a B-17, two days after his 21st birthday.

Eugene was very close to his Palm Springs High School classmates of 1957, sharing special occasions, fun and friendships over 60 years, good friends all.

He was also a director of the World Boxing Hall of Fame.