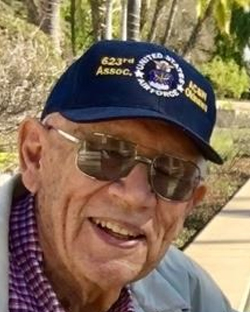 Eugene W. Waples passed away peacefully at the age of 90 on February 12, 2022. Gene was born on June 12, 1931 in Monterey Park, California. He lived most of his life in Riverside, California, graduating from Poly High School in 1949. In 1950 he enlisted in the U.S. Air Force and was stationed at Kadena Air Base in Okinawa, where he met the love of his life, wife Mariko. Gene served as a radar operator with the 623rd Air Control and Warning squadron, call sign "Lightsword." For his service to his country, he was awarded the Korean Service Metal, UN Service Metal, Good Conduct Medal, and National Defense Service Medal. Gene was honorably discharged as Airman First Class in December 1953. He worked for nearly 50 years for American Parts System – 40 years full time, and 9.5 years part time. He retired as a Warehouse Supervisor. During many of these years he also worked part-time at the Riverside YMCA. He is predeceased by his wife, Mariko Waples, who passed away September 21, 2021, and by his parents H. Gerald and Mildred Bernice (Watland) Waples. He is survived by his brother Gary Waples (Judy) of Colorado, three children Diane Colonelli (Joe), Rodger Waples (Paula), and Richard Waples, four grandchildren Aaron Colonelli (Melissa), Nicholas Colonelli (Tavish), Samantha Russell (Tim), and Randall Waples (Amanda). He was blessed with three great-grandchildren, Abigail and Sophia Colonelli, and Nolan Waples. He is also survived by his niece Cindi Fields (David) of Idaho, along with many other beloved family members and friends in the USA and Okinawa.