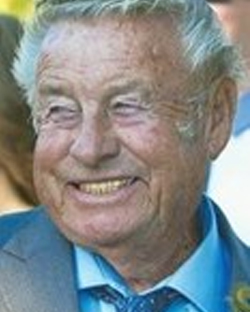 Floyd R. Hergenreder lost his battle with leukemia on July 30, 2019. He was with family and friends when he passed. Floyd was born in Michigan as the first in a line of five boys. He was raised on a working farm where he learned to care for and respect animals as well as developing skills for repairing machinery. His time on the farm taught him to love hard work, play, and family. He is a veteran of the Korean war where he served in the United States Marine Corps. After his service he met his wife and started a family.

After heading west, he turned his love of fixing things into a career, building homes throughout Southern California. Like many of Southern Californian neighbors, Floyd became a huge fan of Angels baseball, enjoying many games. His wife of 64 years was holding Floyd’s hand as he passed from this life which he enjoyed to the fullest.

He spent time boating, fishing, hunting, camping, and gardening and taught his children and grandchildren to do the same. In retirement, he spent his time listening to country music while he built furniture for family and friends. Floyd’s love of music and dancing took he and his wife to many Bluegrass festivals, with their beloved dog.