Written by Night For Vets on February 26, 2020. Posted in Gone But Not Forgotten 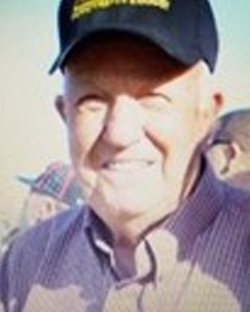 Frank Francis Damico was born on January 11, 1926 in Sewickley Township, Pennsylvania to Pasqual and Michelena Damico. Frank had 4 brothers and 2 sisters and was the last living sibling. Frank was very proud of his military service. He was in the Army, Infantry 69 Division 1, Army Regiment 271 from August 1944 until July 1947. His service in WWII took him to England, France and Germany. He fought in the Battle of the Bulge. In August of 1947 Frank moved to California where he worked for 27 years in the produce department at several Vons’s locations. In December 1963 Frank married Marie Sloan and they moved to Hemet, California in August 1977. They spent many years wallpapering together in Hemet. Marie passed away in November 2007 and Frank remained in Hemet until his death on Sunday, February 2, 2020.