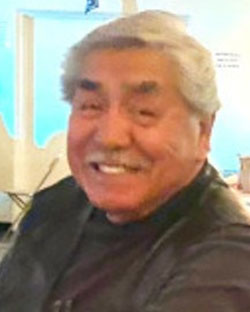 August 16, 1943 – April 27, 2022 Age 78, resided in Colton, CA. He was preceded in death by his daughter Brenda, his parents Jose and Isabel Granado, two brothers, John Granado and Fred Herrera, and two sisters, Andrea Quesada and Mary Alvarado. He is survived by his wife of 58 years Terry; his son Marco; daughter-in-law, Bernie; his grandsons Jacob, Jared, Jason and Justin; his siblings Jack (Helen), Frances, Mary Lou Lopez, Joe (Sally), Josie Quintana (Rick), Robert Herrera (Lisa); and several nephews, nieces and godchildren. Frank attended and graduated from Colton HS and served in the U.S. Army where he was honorably discharged. He retired from the California Portland Cement Colton Plant in 2002 after 40 years with the company. Frank loved to dedicate his time to the youth of the City of Colton by coaching for 20 years combined at Ken Hubbs LL, Colton Youth Football and Colton Pony Baseball. He also umpired for 20 years in the local youth baseball leagues. Frank later joined the Knights of Columbus, Catholic War Veterans, and the American Legion Post 155, where he was named Commander. From there he rose to the rank of 25th District Commander and 5th Area Department Vice Commander. At the time of his passing he was a member of Post 421 in Highland, CA. His favorite sports teams were the Dodgers, Atlanta Falcons and he was a long time season ticket holder of the IE 66ers. His passion was attending American Legion events and watching his grandsons play sports. He was loved by many and is going to be greatly missed.