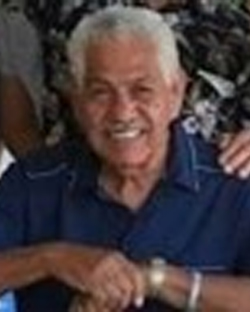 Frank J. Guzman (Cisco) April 30, 1934 – March 19, 2019 In 1952, Frank enlisted in the United States Navy. He worked as a Boiler Room Operator on the USS Pickaway APA 222 receiving multiple awards before he was discharged with full honors. He continued to serve in the United States Naval Reserve in 1956 as a Boiler Room Equipment Mechanic Leadman at Norton Airforce Base until he retired in March of 1983.

He was preceded in death by his wife Teresa Guzman; his daughter Martha Guzman, and his son Frank Guzman Jr. He is survived by his 4 daughters, Mary Ann Okey, Frances Guzman, Isabel Lewis, and Jennie Bonaime; 8 grandchildren; and 5 great-grandchildren, all of Riverside. His greatest joy was spending time with his family and great-grandchildren/babies. He also enjoyed gardening, deep sea fishing, and raising his cockatiels. He will be greatly missed and forever in our hearts.