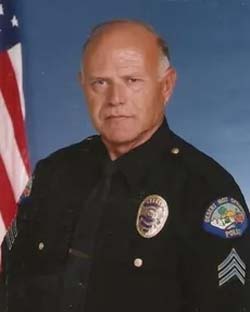 Beloved Desert Hot Springs Police Officer, Sgt. Frank W. Hodge, has after a long illness, succumbed to the effects of methanol poisoning he endured while serving a search warrant on a meth lab. “Sarge”, as he was always affectionately known and called, was born in Fort Warren, Wyoming on September 12, 1941. He spent his childhood in the big city of Denver, Colorado and when he was 8 years old his family bought a dairy farm in Ft. Lupton. Frank considered Ft. Lupton his “hometown”. The dairy farm brought new meaning to the word “chores”; but he worked hard at them just as he did everything else in his life. Three months after his high school graduation, Frank joined the United States Marine Corps. Stationed at Camp Pendleton in Oceanside, CA, the Marine Corps gave Frank his opportunity to travel abroad at 18 years old. (Hawaii, Japan, Hong Kong, Okinawa, Borneo, Laos, Guam, and the Philippines.) Closer to home, Frank loved to go to Tiajuana, Rosarito and Ensenada. His final assignment/duty in the corps was as an MP at Miramar Naval Air Station. Frank met the love of his life, Judy, on August 18, 1962, at a coffee shop in Hollywood and he asked her to marry him that night. This is the anniversary that he celebrated every year since. They married on June 29, 1963. Son Brian was born in 1964; daughter Deidre was born in 1965; another daughter Heather was born in 1969; and finally a second son Barry was born in 1971, and their family was complete. After discharge from the Marines, Frank joined Judy’s family in their bakery businesses in Hawthorne and Hollywood. Feeling the entrepreneurial spirit, Frank bought a small bakery in his hometown of Ft. Lupton, and it was shortly after that venture that he first got into law enforcement . After about 18 months, the family returned to Hawthorne where Frank joined the Hawthorne Police Department. He spent 13 years with the HPD, while also raising his family, attending his children’s school and extra-curricular activities, even coaching some teams. Higher learning and reading were always passions for Frank. During those same 13 years on the force, Frank earned an AA from El Camino College, a BS from Pepperdine University, and his Master’s Degree from USC. Wanting to enhance his police skills, especially to deal with youth in the community, Frank also attended the DCI (Delinquency Control Institute) at USC. Having a strong desire to teach, Frank moved his family to Reno, Nevada; but landed at the MGM/Bally’s Hotel & Casino as Director of Security; at that time Bally’s was the largest property in Northern Nevada. Police work was still drawing Frank in and he became the Chief of Police in the small town of Lovelock, Nevada. Southern California was once again speaking to Frank and he liked the idea of weather change and a small town feel again. He was one of the original officers for a new department that went to the local jurisdiction from the County Sheriff’s authority. He was assigned the rank of Sergeant because of education and previous experience , which also helped to get the DHS Department P.O.S.T. Certified.During Frank’s time with the DHS Police Department he started the Neighborhood Watch Program, coordinated Citizens on Patrol Division and was instrumental in starting the “Cops & Kids Day” Frank enjoyed watching the Greenbay Packers and the Pittsburgh Pirates, really all baseball, but what gave him the most joy was anything that had to do with Judy, his children, and grandchildren. Frank is survived by his wife, Judy; his children and grandchildren; son Brian (wife, Sharon – kids, Ashley, Kateri, Kevin Hodge); daughter Deidre (daughter, Maya); daughter (Heather); and son Barry (wife, Patricia – kids, Anderson, Adila, Jeremiah Hodge); and many cousins, nieces and nephews across the country. Dad imprinted many life lessons and wisdom in us: a love for knowledge and continual learning; the truth will always prevail; and everyone is equal in his eyes whether rich/poor; old/young; infirm/healthy; saint/sinner. But ultimately his commitment, loyalty, and love of and for family and others is the greatest gift he ever gave us and those will live in our hearts eternally. Our father though, will have his name live on because in 2003 the City of Desert Hot Springs, CA dedicated a skate park in his name, The Sgt. Frank Hodge Skate Park on West St., behind the main Fire Station. It is a tribute to all the programs he instituted for safety, community involvement, and his dedication to the betterment of the city’s youth. Now it doesn’t get any cooler than that. Our father wasn’t the biggest guy, but we never saw a man walk taller in our lives. Frank peacefully entered into eternal life on August 12, 2022, at home surrounded by his family.