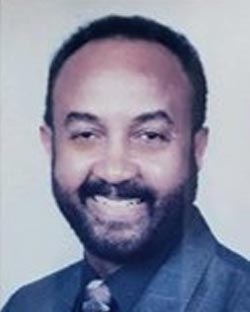 “For I am now ready to be offered up & time of my departure is at hand, I have fought a good fight, I have finished my course, I have kept the faith.’ II Timothy 4:6-7

On Sat. 4/20/2019, God in His infinite wisdom & mercy, smiled & called one of His angels, Frank Marshall, Jr. (affectionately known as “Boogie” or Pop) to rest at the age of 80 after a long courageous fight on Easter Eve. Frank was born on 7/13/1938 in New Orleans, LA to the late Rev. Frank Benjamin, Sr. & the late Ethel Mae Ross Marshall.

Frank accepted Christ, baptized in 1949 age 10 in the MS River by his g-father the late Rev. David Ross, at Greater Woodville Baptist Church in Wallace, LA. Frank attended schools in NOLA, graduating from Joseph S. Clark, Sr. H.S. As a Vietnam vet, achieved an AFAAS degree while serving in the USAF, retired after 20 yrs of honorable service. Then worked for Wang Computer Associates.

As a shepherd of men, he was also devoted to the “Word”. “The Lord is my Shepherd; I shall not want, he maketh me to lie down in green pastures: he leadeth me beside the still waters. Psalm 23:1-2″I can do all things through Christ who strengthens me” Phillippians 4:13.The sunset of his wndrful life is mourned & clbrted by mny.He lvs cherished memories, his wife Veronica E. Marshall; children Frank, Wayne, Aaron, Michael(Darcy), Marlon, Maurice, and Trevon; children by way of marriage Tawnya, Millian (Maurice), Santaeze, Chrisenta (Chrissy), g-children, many foster children: remaining siblings of 10 are Mnstr Lorraine Grant, Mnstr Joyce Pierre, Mnstr Barbara Marshall, Dcn Ervin Marshall, Mnstr JoAnna Naquin and LaMonte; host of nieces, neph’s, csns, and other rel & friends. Frank Marshall, Jr. loved God, family, & friends. Frank is finally home. Go on, get your rest, one day we will see you again.