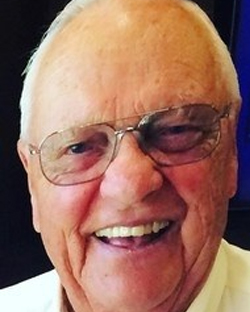 Frank James Roppolo, age 90, of Grand Terrace, CA, died on January 25, 2021, in Redlands, CA, peacefully. Frank was born on November 13, 1930, in Riverside, CA. In 1957, Frank married Mattie Morra, from Guasti, CA; Mattie passed away in 2001. The young couple moved to Grand Terrace in 1958, where they raised their family and were involved in the growing community. Mattie worked at Grand Terrace Elementary School for over 25 years. Frank was active in the incorporation of the City of Grand Terrace and other civic programs. Children of Italian immigrants, both Mattie and Frank grew up in Guasti, CA, graduated from Chaffey High School and attended Chaffey College. Frank served in the U.S. Army after recovering from polio at age 19. Frank’s military service was unique as he was assigned to Operation Castle on the islands of Enewetak and Bikini Atolls. While on the Marshall Islands, Frank witnessed the testing of high-yield thermonuclear hydrogen bombs. After returning home, Frank proudly worked for Johnson Tractor Company where he successfully sold Caterpillar Machinery for over 45 years. Frank thoroughly enjoyed learning and sharing his knowledge of tractors, earthmoving equipment and construction. Frank’s passions were his family, friends, Catholic faith, Caterpillar tractors, Ford cars and NASCAR racing. His hobbies were golf and meticulous care of his home and yard. Frank is survived by his two children, Mike Roppolo and his wife, Anna, of El Dorado, CA; and Vikki Roppolo Davis and her husband, Trent, of Park City, UT. Frank was so proud of his four grandchildren, Lauren and Christopher Roppolo; and Katherine and Caroline Davis.