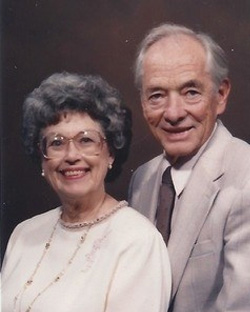 Franklin D. Green and Wanda M. Green, married for 75 years after a short WW II courtship, and the parents of 5 children, died just weeks apart and are happily together again. Wanda died on August 5, 2020 and Frank, his job as loving caregiver for his wife completed, left to join her on August 26, 2020. Frank (“Buck” to his friends) was born in Salt Lake City, Utah on March 4, 1923, one of 7 children born to Franklin O. Green and Sarah L. Green. Wanda was born in Phoenix, Arizona on May 11, 1924, one of 3 daughters of Joseph N. McFate and Ethel I. McFate. Frank and Wanda crossed paths in Arizona in 1945 as Frank was returning from India after serving in the Army Air Corps in the C.B.I. (China-Burma-India) theatre of World War II as part of the crew of a B-24 Liberator bomber (top turret machine gunner) that flew more than two dozen missions out of India and “over the hump” of the Himalayas into Indochina. At the end of the war, a chance meeting between the two at a church dance while Frank transited through Arizona on his way to being discharged in California, resulted in dating for 4 weeks. Frank’s unexpected receipt of orders to report to a base in California 2 weeks later, and a whirlwind courtship resulted in a marriage on July 12, 1945. The marriage was followed by an all-night drive in order to report on time the following morning to Frank’s new posting prior to his final discharge. They returned to Salt Lake City to surprise his family with Wanda, his new wife! Frank and Wanda settled in Salt Lake City where Frank attended the University of Utah, graduating in 1949 to begin his career in education. Frank, while going to college and then beginning his teaching career, built their first home by himself in Kaysville, Utah. It was an accomplishment he repeated later in Alta Loma, California after Frank and Wanda and their 5 children moved to California in 1956. It was the home where Frank and Wanda lived for the next 61 years until they passed away. Frank earned several additional graduate degrees while teaching math classes at Upland High School before becoming a counselor and administrator. His 37-year career in education included several decades of teaching evening classes in “The Mathematics of Electronics” at Chaffey College. While Frank taught, Wanda was the primary caregiver raising their 4 sons and a daughter while working as a medical transcriber for 16 years at San Antonio Hospital. Frank was tall, strong, handsome, structured, and quiet. Wanda was attractive, sweet, a loving mother, and the glue that bound together both the immediate family and the extended families. Frank’s passion was fishing the Madison River out of Ennis, Montana with his brother and best friend, Hap Green. The two of them fished that river together, played cards, discussed their families, and solved the world’s problems every spring and fall for more than 50 years. Frank was quietly proud of his service in World War II, which assumed greater significance to him as he grew older. In his later years he began showing his medals and other memorabilia, including his original leather bomber jacket. Wanda was a gifted knitter who knit many of her dresses and coats. She was resolutely upbeat, truly cared about and loved her family, and accepted with grace and good humor the many pranks her sons played on her. She was happiest when her children and their families were around her. Frank and Wanda spent many joyous times with their children and grandchildren renting condos at the beach in Oceanside and visiting together. Following Frank’s retirement and a surprise gift by their children of a cruise to Alaska, Frank and Wanda spent many years taking cruises that took them all over the world. Committed members of the Church of Jesus Christ of Latter-day Saints, Frank and Wanda were married for time and all eternity in the Temple in Salt Lake City. Their great-great grandparents were early Mormon pioneers who trekked across the plains in 1847 to settle in Salt Lake City. Both Frank and Wanda held many different leadership and service positions in their local church ward during their lifetimes. Frank quietly served for a total of 57 years as finance clerk of his ward, purportedly the longest-serving finance clerk in the history of the Church. Frank and Wanda, part of the greatest generation, lived remarkable and quiet lives, devoted to their family, their Church, their friends, and their community. In Wanda’s final few years dementia gradually robbed her of her short-term memory and Frank more and more became a caregiver for her, even as he coped with his chronic Crohn’s disease that afflicted him for 77 years. Throughout it all, the love and affection each had for the other never wavered their commitment to each other provided a wonderful example to all. Wanda left us at age 96, and Frank, his final job as his wife’s loving caregiver complete, left three weeks later at age 97 to join her. Both of their sets of parents preceded them in death, as did Wanda’s two sisters Elaine Stapley and Joanne Jansen, and Frank’s sisters Ruby Dickson, Yvonne Loeb, Lillie Vincent, and his twin brother George Richard Green who died in infancy. Frank and Wanda are survived by their 5 children Joseph, Marilyn, Gregory, Richard, and Kenneth, by 23 grandchildren, by 54 great-grandchildren, by 2 great-great grandchildren, and by Frank’s 99 year old brother King Green and his 91 year old brother Hap Green.