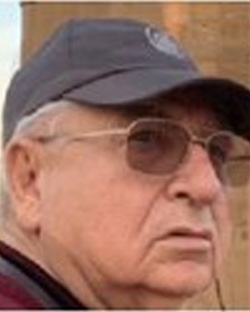 FRED A. CAPUANO Age 81, went to be with the Lord on March 23, 2020. He passed peacefully from medical complications of a recent surgery. He was born in Sparanise, Italy and came to America as a toddler. As a child, he grew up in Trenton, NJ. Upon high school graduation, he proudly served his country in the Navy and later worked for the Navy as a civilian Distribution Specialist traveling the world. Fred’s prized possession was his 1973 VW bus which he lovingly restored. The vehicle appeared on a magazine cover and was awarded numerous trophies at car shows including Best of Show. Fred and his wife Rosemary loved to explore and were avid world-wide travelers. His suitcase was always packed and readied for the next adventure. He loved to brag about his journeys to friends and acquaintances. His pictures were endless. Fred enjoyed fine food, wine, scotch, and poker with the guys. Fred enjoyed NFL football and was forced to root for the Patriots. Most importantly, Fred will be remembered as a loving husband, caring uncle, doting great-uncle, and best friend. He is survived by his wife Rosemary, sister-in-law Donna (Larry), nephews David (Diana) and Michael (Dominoe), and great nieces and nephews. Fred was a member of American Legion Post 216 in Corona, CA, The Men’s Coffee Club at the Corona Senior Center, and the 7/27 Social Club.