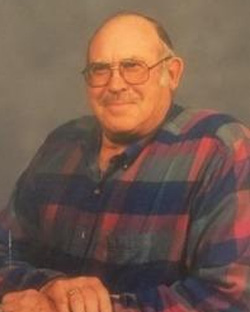 Fred Jay Stansbury of Riverside, CA, passed away peacefully into the hands of the Lord on Saturday, November 9, 2019 at the age of 90, while at his VA extended living facility. Fred was born on the family dairy farm in Amsterdam, Missouri to Fred Earl and Nellie Marie Stansbury. The family sold the farm in 1948 and moved to Riverside where Fred joined the National Guard.

After his service period, he returned home to find employment as a Truck Driver & Mover for Citizen’s Transportation-United Van Lines where he was employed for 39 years. Fred served his country with honors when deployed to the Korean War, from 1950 -1952 with the Army National Guard 6th Army, 40th Infantry Division, Headquarters Company 2nd Battalion, 244th Regiment. During his tour of duty Fred earned the Korea Service Medal with one Bronze Star, the United Nations Medal, and Combat Infantry Badge (CIB). He was honorably discharged in 1952 with the rank of Corporal.

Fred married Eunice Jeanne Duffer, in 1955 and were soon blessed with two sons, Dennis Jay Stansbury and Kenneth Lee Stansbury. Fred’s love was his family and enjoyed BIG diesel trucks and camping. Fred also enjoyed being a Boy Scout Leader, socializing with the other parents at Little League games and making life-long friendships through the PTA. Fred was a founding member of the Riverside Aristocrats Trailer Club, a lifetime member of the VFW and a member of Faith Community Church in Riverside.

Fred’s wife Jeanne passed away from cancer in 1977 and Fred threw himself into work and camping. Love came into Fred’s life again with his marriage to Patsy Ann Palmer on March 22, 1985 and with this new union, Fred’s family and love grew with a new daughter Cathy Jenkins; new sons Cleve, Mark and Mike Palmer. Fred and Patsy were blessed with many great camping and traveling adventures across America and a growing number of grandchildren, and then great grandchildren.