Written by Night For Vets on April 13, 2020. Posted in Gone But Not Forgotten 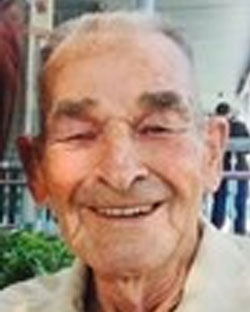 Age 93, passed away peacefully at his home in Calimesa, CA on April 4, 2020. Fred was born in Moscow, ID on August 19, 1926. Raised during the depression, at 17 years young he served in the USN during WWII and after his service, married his bride and raised three children in Fontana, CA. He retired in 1980 from Kaiser Steel and belonged to Kaiser Rock Club and eventually became a member with San Gorgonio Mineral & Gem Society. Fred was preceded in death by both his parents, Edith and Jess White, brother Sam White and son Charles William White Sr. He is survived in legacy by his wife of 67 years, Jean White of Calimesa, CA; children, Louise (White) Mierzwik, of Calimesa, CA and Edward Alvin White I and wife, Rose, of Yucca Valley, CA; grandchildren, Charles White Jr.; Kattie (Mierzwik) Pleger; Andy Mierzwik and wife, Linda; Michelle (White) Erb and husband, Mike; Edward White II and wife, Ann; Matthew Mierzwik; Amy (Mierzwik) Guisa; Ramesh Shrinarine; Bobby Straka & family; Zack Anderson & family; Kristina Anderson & family; Andy Anderson & family; great-grandchildren, Mitchel, Courtney, Cameron, Carter, Savannah, Gussie, Brianna, Erica, James, Spencer, Paizely, Kennedy, Austin, along with a host of loving family and friends. He was a strong, all-American man of few words and many memories. When he spoke, you’d sit and listen. He had many tales of his fishing, rock-hounding, traveling and WWII. As his age progressed, his memories became stories that would live in the hearts of his family forever. Husband, father, grandfather, great-grandfather; We will think of you in silence, We will always speak your name, For we have many memories, And pictures in a frame.