Written by Night For Vets on March 13, 2020. Posted in Gone But Not Forgotten 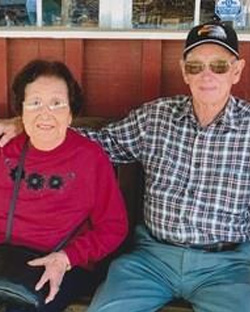 Noriko (Hatakeyama) Roush, 90, of Riverside, CA, passed away on February 22, 2020. Noriko was born, April 22, 1929 in Yokohama, Japan and was a dedicated mother and wife first and foremost. She was the eldest daughter of 11 brothers and sisters and worked for the U.S. Army Chaplain at Mt. Fuji, which is where she met and married her husband Garland Roush. Together they raised two daughters, Marie and Joyce and have five grandkids, Grant, Christine, Lisa, Breanna and Raina. Noriko loved sewing and cooking traditional Japanese meals for her family, grandkids and friends. She also loved to garden and spent a great deal of time outside tending her plants and flowers.

Garland Harold Roush, 89, of Riverside, CA, passed away on February 25, 2020. He was born, April 26, 1930 in Houston, Texas to Harold and Lily Roush. They lived in Galveston, Texas. In 1952 he enlisted in the Army and completed his basic training at Fort Ord, Ca, and was sent to Mt. Fuji, Japan, which is where he met and he married Noriko Hatakeyama. Together they raised two daughters, Marie and Joyce and have five grandkids, Grant, Christine, Lisa, Breanna and Raina. Garland and his wife Noriko celebrated 66 years of marriage February 20, 2020. In 1993 he retired from the Disneyland Hotel after 33 years as chief refrigeration engineer. Garland loved being outdoors, working on cars, building model boats and spending time with his daughters and grandchildren.