Written by Night For Vets on December 12, 2020. Posted in Gone But Not Forgotten 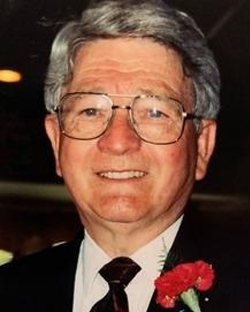 Age 87, passed away on Wednesday,November 25, 2020 in Seattle, Wa. Garland was born April 11, 1933 in Pangburn, Arkansas. Garland graduated from Pangburn High School in 1951. Garland was drafted into the U.S. Army in 1951 fought in the Korean War. Garland graduated from the University of Central Arkansas in Conway, AR in 1957 and received his MS from the University of Idaho in 1967. Garland’s passion was teaching and was a Mathematics teacher at Norco HS in Norco, CA for over forty years. Garland is survived by five children: Craig Mccollum (Terry) Mark McCollum, Kimberly Grizzle, Natalie Fueglein (John) and Melanie Christian; his first wife Betty Healy McCollum Sanders; his sister Gail Wood; fourteen grandchildren and five great grandchildren. He was preceded in death by his second wife Carolyn Mulliken McCollum, a daughter Regina Lynn McCollum Clark, a daughter-in-law Kerry Keaton McCollum, his parents Monroe Lafayette and Samantha Jane McCollum and four brothers and three sisters. Garland will be remembered well for his infamous “coin trick.” As far as we know no one ever beat him at that game! He spent the last few years traveling with his late wife Carolyn. He also loved to take road trips to visit his family and friends in Arkansas. His yearly highlight was the Norco HS reunions…he truly loved all his fellow colleagues and past students. Garland was a beloved Dad, Brother, Teacher, Grandfather, Great Grandfather, Uncle and Friend who will be missed immensely.