Written by Night For Vets on August 21, 2020. Posted in Gone But Not Forgotten 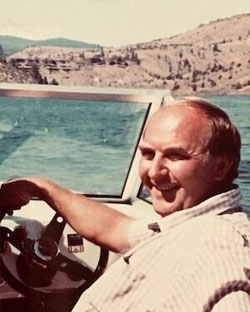 Gary Anthony Herauf died Friday June 10th of natural causes after battling symptoms of Lewy Body dementia. He was surrounded by family and friends during his month long stay at St Charles in Bend, Oregon.

Gary was born in Dickinson North Dakota, the fourth of eight children born to Helen and Joe Herauf. Raised on a farm in Dickinson, Gary’s earliest memories were of milking the cows before school, having to walk to the barn through a path in the snow that was deeper than he was tall, and at the age of 9 driving his first truck of grain to the grainery for his dad. Gary’s family moved to Beaverton Oregon when he was 10 years old. By the age of 13 he bought his first car, keeping it hidden from his mom. By the age of 15 he was managing a gas station and the mechanics who worked there. His mom wasn’t happy that he would go to the coffee shop with the crew after work, “they are too old to be hanging around with” she’d say. But that was Gary’s personality, to network and learn from others.

Gary graduated from Sunset High School in Beaverton, class of 1963. In 1968 he was drafted into the Army, even though he had a rod and pins holding his crushed calf together, “he was still useful”. While working state side at Fort Benning in Columbus Georgia he was responsible for the mail and the lunch truck. While driving the lunch truck the troops would ask, “Why don’t they sell cigarettes?”. So Gary solved the problem and bought a case of cigarettes on his way to work to sell to the men, “after all they were putting their lives on the line for our country, they deserved a smoke”, Gary said.

After the Army Gary returned to Pendleton Oregon with his young family, where he learned home construction from his father-in-law. Gary built and remodeled homes the rest of his life. Over his 40 year career he built great customer relationships, as well as amazingly creative homes. He won awards and was even featured in Architectural Digest for one of the homes he built. Gary was extremely proud of this accomplishment.

Gary was not all work. He enjoyed spending time with friends and family, playing, partying, and volunteering,. Camping, fishing, and boating was his favorite getaway, and riding his motorcycle. In his 60’s, as he retired from building for others, he was drawn to volunteer by helping deliver Meals on Wheels, fishing with senior Veterans, and assisting with parties at the senior centers in Weiser Idaho and Lake Havasu Arizona.

Gary was preceded in death by his mom and dad Helen and Joseph Herauf, and brothers Ken and Dale. He is survived by his siblings Ann, Kathy, Alan, Ted, and Melanie, his children Jonathan, Heidi, and Heather, and his grandchildren Aubrey and Olivia. He is very missed, and loved.