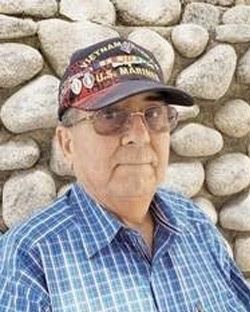 Gary Lemos, beloved life-long resident of our community, passed away on September 8, 2021. Gary was born December 1944, and grew up in East Highlands. He graduated from Redlands HS and attended Valley College. Gary enlisted in the USMC and proudly served in Vietnam and in the Marine Corps Band. In combat, he was awarded two purple hearts. Gary continued his military service in the USAF National Guard. Gary retired from the San Bernardino City Schools after 35 years. Proud of his indigenous ethnicity, Gary was very active in the American Native Music Community. Gary co-founded IMISA, an organization dedicated to educate students about the history and culture of Indigenous People. An accomplished American Native flute and percussion artist, Gary and his music partner, Sarah Thomson, produced music and performed extensively locally and abroad. Gary was predeceased by his mother, Lillian Mendoza, and his father, Henry Lemos. He is survived by his siblings, Mary Louis Cabral and Herlinda Constante.