Written by Night For Vets on June 15, 2018. Posted in Gone But Not Forgotten 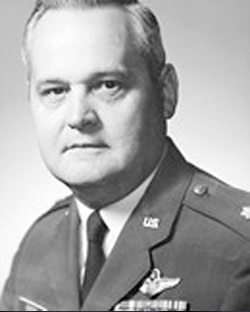 Gary passed away peacefully in Redlands, California at age 85, leaving a legacy of fond memories for his family and friends. He was born in Pittsburg, PA and grew up in Chambersburg, PA, where he earned college money as lead singer and trumpet player in a dance band. Gary went to the University of Pennsylvania, Warton School, graduating in 1954 and was commissioned a Second Lieutenant in the Air Force.

His first assignment was Sioux City, Iowa where he met his future wife, Harriett. His Air Force career included assignments in Texas, Mississippi, Florida and Germany. While in Germany, Gary completed a Master’s Degree in Aerospace Management in the first overseas program from the University of Southern California. Next was an AFIT Assignment at Grumman Aircraft Corp in Long Island, NY in a program called Education With Industry. After completing a tour in Korat, Thailand as an Electronic Warfare Officer, he was assigned to Sumpter, SC and then Columbus, OH. The family relocated to California, where Gary was assigned to Norton Inspector General Command and then to March AFB as Chief of Contracting Office followed by his Air Force retirement. Later, Gary took a position with the Los Angeles City Housing Authority. His last employment was with Riverside County Office of Education.

Gary loved hunting and continued his avid fishing habit well into his 80’s, often sharing his catch with neighbors and friends. Gary served as Deputy Commissioner of Museums of San Bernardino County. Gary’s other avocations included music, especially jazz, skiing, travel, reading and spending time with friends and family. He served on the board of Snow Lake Lodge in Big Bear and also enjoyed spending time with Harriett, family and friends at the Tennis Club in Palm Springs.