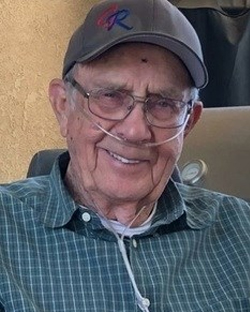 Gearld Rozema age 90, of Redlands passed away peacefully at his home in Yucaipa, CA January 21, 2021. He was born May 30, 1930 in Chicago Illinois and lived in Redlands and Yucaipa from 1936 to present. He graduated from Redlands High in 1948. Gearld Served in the US Navy during the Korean War between 1948 to 1952. He is survived by his wife Erma (Jody) Rozema, daughters Sandy (Bryan) Stinson, Cathy Rozema, Kelly Rozema, son Jay Rozema, 12 grandchildren and 9 great-grandchildren. Sister Winifred Van Uffelen, brothers, Richard Rozema and Edward Rozema. He was preceded in death by his daughters Karen Rozema Thomason and Geri Rozema. He was a great husband, father and grandfather, He loved his family and will be greatly missed.