Written by Night For Vets on December 2, 2022. Posted in Gone But Not Forgotten 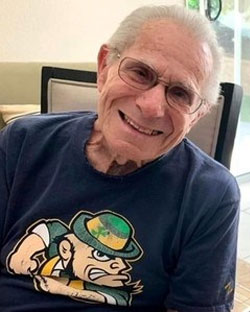 George DeMarco, of Highland, Ca, loving husband, father, grandfather and friend, passed away on November 12, 2022, at the age of 91 due to natural causes. Born in Newark, NY in 1931, he was the son of the late Cosmo and Margaret DeMarco. He attended San Bernardino HS, Loyola Marymount and The University of Notre Dame. He returned to the San Bernardino area after graduating from Notre Dame and serving in the Air Force during the Korean War. He started his tax accounting service, dabbled in construction with his brother-in-law and officially retired from practice in 2018. Throughout his life, he was very active in sports, coaching, and with the YMCA. He played football at SBHS and spring ball at Notre Dame. He coached both his son and daughter’s sports teams at St. Adelaide school, where he was also active in the church. He is preceded in death by his parents, his loving wife, Diana and his sister, Gerry. He is survived by his son, Larry (Bretta) and daughter, Tina (Eric), 7 grandchildren and 3 great-grandsons.